Admit it. The man is a giant. 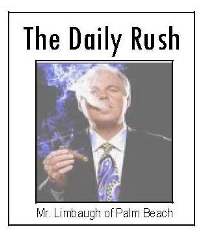 Elvis save me, I did it again. Tuned into Mr. Limbaugh of Palm Beach for five minutes on my way home from a dizzying day. Looking to be entertained I guess. And here is what I heard (paraphrased somewhat):
“Those young rabble rousers on the streets of Egypt or what have you? They have no ideology. You know what they are? They’re guys who like to throw rocks, guys who want to get on television. That’s all they are – just like American Idol or MTV or the Jerry Springer show – that’s what they want, just to get on television.”

I have no idea what his point was because I simply had to turn it off.