George Washington did it. John Adams too.

Now that SCOTUS has finished hearing the challenges to Obamacare, we settle down to wait a few months for their opinion. (Elvis save us from the wrath of those who chant f-r-d-e-e-d-o-m-e-! at every loss if  the justices say, yeah, okay.) 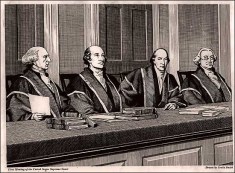 Meanwhile, this is interesting. From friend Ed this morning:

[In] 1790, the first Congress, which was packed with framers, required all ship owners to provide medical insurance for seamen; in 1798, Congress also required seamen to buy hospital insurance for themselves. In 1792, Congress enacted a law mandating that all able-bodied citizens obtain a firearm. This history negates any claim that forcing the purchase of insurance or other products is unprecedented or contrary to any possible intention of the framers.

PolitiFact dug deeper into Elhauge’s claims and found evidence that mandates were approved by Congressmen who had also signed the Constitution; refuting the assertion that the laws passed despite framers’ objections:

There was no roll call for the House and Senate bills requiring health care for seamen. But on the proposal mandating the purchase of a musket, firelock or rifle as part of the larger bill to establish a uniform militia, 10 of the 14 framers whose votes were recorded endorsed the measure.Not only did mandates pass muster with the Framers in Congress, they were signed into law by George Washington and John Adams.

17 responses to “George Washington did it. John Adams too.”