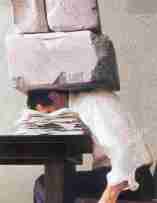 A retired person like my esteemed self is not supposed to be overwhelmed with what we once called ‘work’. But I am.

It’s not the house or yard or other personal projects. It’s the damn volunteer affiliations, where I regularly over-commit, not yet having learned the obvious lesson.

And so I have my piles again, each demanding attention. There’s the newsletter for one board I’m on. And for that board, because I’m now able to remotely access the organization’s servers, I’m suddenly the go-to person for membership and other miscellaneous information as well. 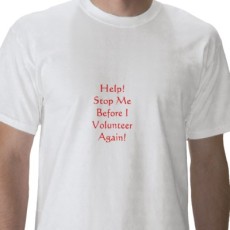 There’s the unfinished grant application for the beach trust where, even though I’m no longer a Trustee (term limited), I seem to have become an ‘advisor’. As such – lucky me! – I get to do a lot of what I did as a Trustee – at least the responsibility no longer rest with me.

Plus the world out there offends me. And it sucks too. So there.

Off the sand and back in the saddle 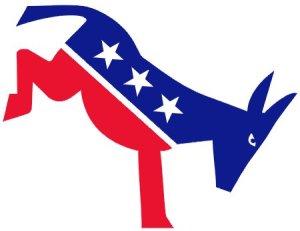 Today, for the second time, I’m headed to a meeting of the local Democratic Club. I stepped away from active involvement after 2010 – mostly because I’d overbooked myself with volunteer commitments. But at the end of this year, I’ll be term limited off the board of an Endowment Trust after six years. Time enough I think. Now it’s back to politics. Local politics.

So I’m going to these little political meetings as a warm up for getting involved with the County Party in 2012. My personal target is the Florida legislature, an incompetent group entrusted with lawmaking by my fellow citizens. 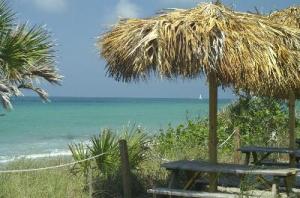 Why I live here

. . .  That Trust I’m leaving has been a central part of my life since I moved here and discovered that my 1950’s development owns a Gulf front beach. Access is by ferry or a two mile walk from the public beach (all beaches are public of course, but our ferry isn’t). Over the years the operating costs around the ferry operation and buildings and land had risen sharply. Everything was managed by a local civic association and they were ready to turn the beach over to the County to finance and manage. 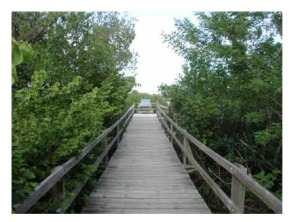 From ferry landing to beach

That’s when some of us got involved and created a legal entity, an Endowment Trust, to hold and manage these common properties for the future and for the use of the entire community. It took five years and there was plenty of resistance within the civic association, but we persisted. And it got done because we had some very talented people who led the effort. We managed some seed money which is now with a trust company and protects  beach access for the future. 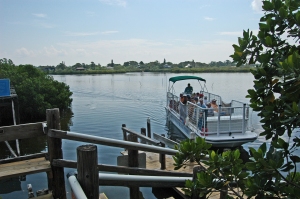 It’s a special place – entirely natural, entirely untouched. No plumbing. No electric. No pavement. Just dunes and scrub and shells and sharks teeth. Gopher turtle abound as do shore birds. There are even shade trees. While other area beaches ‘renourish’ after almost every storm by dumping acres of sand transported from elsewhere, we are more patient. The beach shrinks sometimes. But it comes back always. Such are the ways of nature and the tides.

Maybe I can arrange a beach party for local Democrats once I learn everyone’s name. 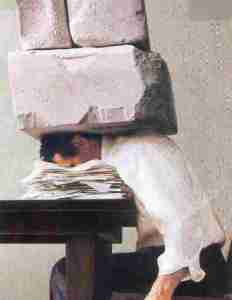 Friend Elaine tells me there’s a t-shirt out there for retirees that says Stop me before I volunteer again. Certainly something to keep in mind for the future. But right now the stuff I do tends to be stuff I always did. I’m just doing more of it. (That being said – every friggin’ thing I get involved with seems to share a deadline date with every friggin’ other thing. Which is not fair!)

The latest project is a committee formed by the local LGBT group under the auspices of Equality Florida. A terrific group with a great goal – get our municipality to pass a Human Rights ordinance which will include gender language. For this one, I was approached by a friend who’s deeply involved and begged that I join – “You don’t have to do anything. Really. We just need a few straight people on this committee who know other people. Honest. That is all you have to do. Just be there.”

Being a tech savvy bunch, we do our business mostly on a Google group list serve which is very convenient. This morning, I have 16 emails from that list serve group. Now I’m thinking of going back to bed.

Like Elaine said: Stop me before I volunteer again.

Posted in Civics, Family and Friends

. . . the blog takes a back seat – a way back seat. And so it’s been for a number of days now, as I climb out from under altogether too many obligations. There’s a tee shirt out there that says “stop me before I volunteer again” which is funny, but doesn’t ring true for me. My volunteer commitments involve ongoing responsibilities I have undertaken.  To back off a bit would  take some time. And I’m not even sure I want to back off; the last three weeks I got behind and am now in catch up mode. So once I get through the current to-do list, I’ll reevaluate. But till then, blogging will continue light.

But my personal schedule doesn’t stop the clock – today is in fact the 194th day of the ninth year of the War in Afghanistan.