Part the firstest: f*ck iGoogle. (Can anyone recommend another homepage I can customize? I’m on Firefox.)

Million Vets to Cruz, Palin: get yer own podium

They’ve posted this on their homepage:

Official Stance of the Million Vet March on the Memorials

The political agenda put forth by a local organizer in Washington DC yesterday was not in alignment with our message. We feel disheartened that some would seek to hijack the narrative for political gain. The core principle was and remains about all Americans honoring Veterans in a peaceful and apolitical manner. Our love for and our dedication to remains with Veterans, regardless of party affiliation or political leanings.

Mr. Cruz, Ms. Palin and some attendees, including political parties may have not been aware of the goals of the marches which took place in over 60+ rallies across the nation.

. . . Ah well, I now hear that Cruz’ ‘filibuster’ is “in name only” as the vote has already been scheduled and his talkie-talkie can’t delay it further. So it’s theatre and therefore well suited to our Cuban Senator from Canada who is totally – TOTALLY – a natural born citizen.

Ladies and gentlemen! Citizens of television land! I call you to gather at the CSpan for the Greatest Show on Earth!! Ted Cruz has taken the floor.

This is the third real filibuster in the last few years and that should be a good thing. I much prefer it to the invisible procedural nonsense of  placing holds.  Last year, Bernie Sanders (D-VT) did eight hours and last winter Rand Paul did thirteen hours. I don’t think either changed any minds, but they were presented honestly and honorably.

But this one? After hours of Ted Cruz sends the whole populace rushing for the showers, other Congress Critters might decide that doing business in the shadows was the better idea after all. 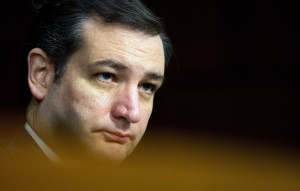 If Elvis has any mercy left to spare us, then this guy will burn out before he has a chance to do anything like the damage done by the paranoid, alcoholic junior Senator from Wisconsin. Pure Maoists, both of ’em.

. . .  with his latest attack on Hagel, Cruz has gone too far. Cruz has every right — indeed, he has an obligation — to question Hagel vigorously. He has a right to demand relevant information. He has a right to vote against Hagel; indeed Republicans are now filibustering the nomination.

But he doesn’t have the right to smear Hagel, with no supporting evidence, with insinuations that the nominee received money from foreign governments or extremist groups.

“We do not know, for example, if he received compensation for giving paid speeches at extreme or radical groups,” Cruz told the Senate Armed Services Committee before it voted Tuesday to approve Hagel’s nomination. “It is at a minimum relevant to know if that $200,000 that he deposited in his bank account came directly from Saudi Arabia, came directly from North Korea.”

The “only reasonable inference” to draw from Hagel’s refusal to provide additional financial information, he said, is that “there was something in there that they did not want to make public.”

New Republican candidate with some chops. I’ll keep an eye on him and I think I’ll donate to the Democrat

The story is at Politico;  here’s some commentary from Think Progress, which is not enthusiastic:

. . .  his considerable intellect is rivaled by his very poor judgment. Here are just five of the most revealing windows into Cruz’ Tea Party worldview:

1) Believes George Soros Leads A UN conspiracy To Eliminate Golf: . . . Cruz lays the blame for this global anti-golf conspiracy at the feet of a well-known Tea Party boogieman — “The originator of this grand scheme is George Soros.”

2) Wants To Gut Social Security: In an interview with the Texas Tribune Cruz labeled Social Security a “ponzi scheme” and outlined a three-step plan to gut this essential program. (And, surprise!, he wants to privatize it.)

3) Wants To Party Like It’s 1829: The Constitution provides that Acts of Congress “shall be the supreme law of the land,” and thus cannot be nullified by rogue state lawmakers. Cruz, however, co-authored an unconstitutional proposal claiming two or more states could simply ignore the Constitution’s command and nullify the Affordable Care Act so long as they work together. . . Cruz falsely claimed that states do not need to meet these Constitutional requirements to undermine laws they don’t like.

5) Campaigned On How He Helped Texas Kill A Mexican: “Cruz fought all the way to the Supreme Court” after “the UN and World Court overruled a Texas jury’s verdict to execute an illegal alien.”. . . the case Cruz won had nothing to do with whether Texas had the authority . . . it concerned whether Texas could defy a treaty requiring it to inform foreign nationals who are arrested of their right “to request assistance from the consul of his own state.” Even North Korea honored this treaty that Cruz fought to undermine.

So, more good fun ahead.