. . .  we celebrate our independence. Because 238 years ago a brave group of revolutionaries threw off a colonial power. That’s something that has happened around the world many times – both before and since. But . . .

. . . I think our greater achievement is this: for 225 years we have maintained a continuity of government (even in war), peacefully transferring power (that one’s just since Washington to Adams, so 214 years) over and over . That’s a testament to the brilliance of our constitution and our continuing respect for it. Good for us!

Half a world in revolt

Some weeks ago I posted that Egypt may be changing our world.

I have my headphones on and am listening to a report from ITN on PBS, my preferred method of watching the news without actually watching. Libya and Bahrain appear to be in genuine revolt. In Bahrain, amidst violence from the government, they’re crying ‘where are the Americans; where are the Brits?” In Libya, the reporter says they don’t care what the US or Brits want or think.  Just hearing these things is a bit jarring.

And then there’s no way of knowing the effect of the US veto in the UN today condemning the ongoing Israeli settlements. The issue is neither the UN’s attempt at condemnation nor the US veto. The issue is will it have any effect on what’s hapepning in the Arab world and if so, what?

By the way, a million showed up today in Cairo – a million – to ‘keep hope alive’.  They’re not done by any means. More clashes could come.

Egypt may be changing our world.

Mubarak isn’t stepping down. Whether that’s the right or wrong move, I honestly don’t know. But the crowd in Tahrir Square is already exhibiting the characteristics of an angry mob. They’ve gone from full of hope to anger in mere minutes. (This is an almost unimaginably huge mob.)

UPDATE: Richard Engle just reported that protestors have begun a march to the Presidential Palace. He does add, however, that they may be directing their main efforts and energy toward an even larger march tomorrow. 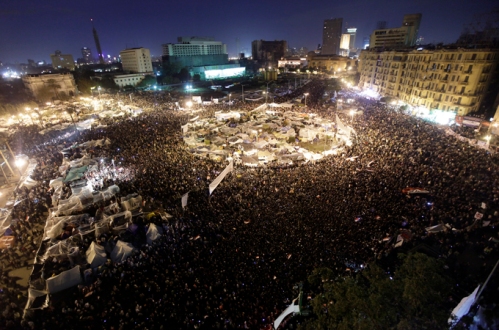 Egypt may be changing our world

Egypt. Wow. I just plugged in – been doing yard work most of today. I just brought up Al Jazeera English for the live feed and have my teevee on as well – (the crowd shots are identical right now).

We don’t get moments like this often. The entire world is watching as the oldest nation on the planet charts its future. It’s fraught with danger but there is no stopping it now. If Mubarak doesn’t firmly resign, I fear greatly for the next days. And even if – as expected – he does, there is always plenty to fear from instability, from jockeying for power – not to mention the enormity of the economic hit the country took and must now recover from.