Here’s me, giving Santorum his due (well, David Frum actually).

I heard this the other night. It was otherworldly. But I heard it indeed. From Frum Forum today:

Rick Santorum is not exactly an odds-on favorite in the race for the Republican presidential nomination. And perhaps that’s why it was Santorum who felt free to articulate an important truth in the GOP candidates’ debate in Las Vegas on Tuesday night.

“Believe it or not, studies have been done that show that in Western Europe, people at the lower parts of the income scale actually have a better mobility going up the ladder now than in America. “ . . .

The freezing of income mobility is distinct from, but probably related to, two other important trends in American life: The stagnation of middle-class incomes and the widening of the gap between rich and poor.

It’s mostly been ignored of course, because Romney touched Perry, which was very important news indeed.

From Orlando, tonight at 9:00 pm on FOX News.  Remember to  put the children to bed and hide all weapons. Then you can pop the popcorn. 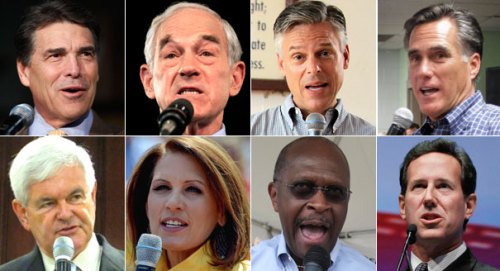 My impression is he does poorly when pressed to answer questions with any specifics. Still the audience likes him; they don’t like Hunstman who is, ironically, the bravest of them because he isn’t intimidated by the base.

Oh, and I cannot abide Newt Gingrich. Never could. Pudgy face. I hate pudgy faces. Whitest man ever. And he has a little little mouth.

Ron Paul is occassionally going so libertarian that even this audience is cringing a bit.

And where is Buddy Roehmer? Stewart had him on last night and asked why he wasn’t included. Roehmer said debate rules say  a candidate has to have reached 4% in the polls. Can anyone point to a poll where either Gingrich or Santorum got there?

I’m reminded of the last debate at which Bachmann announced she was a candidate, which meant she wasn’t actually running until then. How the hell did she get into the debate? Never understood that.

UPDATE: I see David Frum agrees with me:

Just speaking personally, I was shocked and surprised at how unprofessional Perry’s debate performance was. Nervous, irritable, stuttering, floundering, he missed opportunity after opportunity.