What if it was Bush? How would I feel? 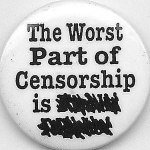 The 2014 World Press Freedom Index is out. Nasty news – again – for the old U-S-of-A where we’ve been sliding into the badlands ever since 9/11. And where my President and his Attorney General have some ‘splainin’ to do. Which will not happen with this President or any future President unless we get really really lucky.

Countries that pride themselves on being democracies and respecting the rule of law have not set an example . . . Freedom of information is too often sacrificed to an overly broad and abusive interpretation of national security needs, marking a disturbing retreat from democratic practices.

This has been the case in the United States (46th), which fell 13 places, one of the most significant declines, amid increased efforts to track down whistleblowers and the sources of leaks. The trial and conviction of Private Bradley Manning and the pursuit of NSA analyst Edward Snowden were warnings to all those thinking of assisting in the disclosure of sensitive information that would clearly be in the public interest.

US journalists were stunned by the Department of Justice’s seizure of Associated Press phone records without warning in order to identify the source of a CIA leak. It served as a reminder of the urgent need for a “shield law” to protect the confidentiality of journalists’ sources at the federal level. The revival of the legislative process is little consolation for James Risen of The New York Times, who is subject to a court order to testify against a former CIA employee accused of leaking classified information. And less still for Barrett Brown, a young freelance journalist facing 105 years in prison in connection with the posting of information that hackers obtained from Statfor, a private intelligence company with close ties to the federal government.

The United Kingdom (33rd, -3) distinguished itself in the war on terror by the disgraceful pressure it put on The Guardian newspaper and by its detention of David Miranda, journalist Glenn Greenwald’s partner and assistant, for nine hours. Both the US and UK authorities seem obsessed with hunting down whistleblowers instead of adopting legislation to rein in abusive surveillance practices that negate privacy, a democratic value cherished in both countries.

At least the UK was spared the shame of our double-digit decline in press freedom. USA!

Don’t bother me with details!

(Update below) Wikileaks is now being mirrored on something like 750 sites (list here) world wide which pretty much guarantees continued access to their information. I don’t know if Sen. Lieberman (and now Sen. Diane Feinstein) are in the mood to go after web sites all over the world.

I just visited Wikileaks.ch (first time for me). Here’s something from their introduction page re the diplomatic cables which we’re unlikely to hear:

The cables, which date from 1966 up until the end of February this year, contain confidential communications between 274 embassies in countries throughout the world and the State Department in Washington DC. 15,652 of the cables are classified Secret. [My note: that’s 15,652 of the quarter million cables they have.]

And I’ll never stop saying this:

(It’s still about the banks guys. Wonder when that promised document dump from inside a ‘major US bank’ is coming?)