The silly never stops: how to define revenge

See, he talks to me in one of these here ears.

Remember when Pat Robertson warned that a hurricane was bearing down on Orlando because his god was angry about all that “Gay Days’ stuff? And it turned out Orlando was spared; the hurricane hit Robertson’s backyard? Truly the silliness never stops.

Denial has its place too; turn away from bad stuff and it won’t happen. Jonathan Turley reminds us:

The epicenter was Mineral Virginia in the district of Republican Congressman Eric Cantor.  You may recall Cantor’s effort to slash the budget of the United States Geological Service (USGS). . . .

. . . . My greatest concern is that Cantor also defended cuts in the National Weather Service and NOAA — and there is a hurricane approaching Washington.

Bombs are threats and that is all. Also Mooslims. And teh gays.

UPDATE: Cantor got more specific today. Via TPM:  “We aren’t going to speculate on damage before it happens, period,” his spokesperson Laena Fallon emails. “But, as you know, Eric has consistently said that additional funds for federal disaster relief ought to be offset with spending cuts.”.

God’s will and all that

When those tornadoes devastated the American South, I wondered  where Pat Robertson had been and why his prayers didn’t stop the tornadoes. Like he can usually do . . .

He credited his prayers for steering the course of Hurricane Gloria in 1985, which caused billions of dollars of destruction in many states along the U.S. east coast. He made a similar claim about another destructive storm, Hurricane Felix, in 1995.[3]

Well here’s our answer – this is why his God went after Tuscaloosa.

ROBERTSON: And I believe that the anointing of the Lord has been here to fulfill the desire of those early settlers, to take the gospel from America throughout the world, and that’s what we’ve been here to do. But let me tell you, ladies and gentlemen, it doesn’t take a great scholar to tell you the United States has lost its moorings.

When you think that courts have denied children the right to pray in schools, that there’s a vendetta against religious belief, that now homosexuality has been made a constitutional right, that abortion has been made a constitutional right, the courts and judges have trampled on the early origins of our nation, they have distorted the meaning of the First Amendment. It’s all been done, and we’ve let it happen.

But I was reading today about a place called Sodom and Gomorrah, and a man named Abraham stood before God, and he says, “God, there’re righteous people in that city, would you kill them along with the wicked, must not the judge of all the earth do right?” And God finally promised, “If I can find ten righteous in that city, I will spare it,” just ten. Well the time came he could only find six, so they destroyed Sodom and Gomorra. But there’re many righteous here in America, and we need to band together and pray that God Almighty will spare this great land and reestablish in our hearts the vision of the pioneers.

Sherry noticed too. As usual, she notices a lot of stuff. I think I need to get up earlier – else she scoops me every time!

Earl is comin’ for the gays 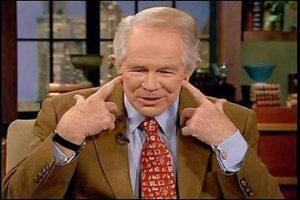 See, God talks to me through my back teeth, right here.

God keeps having to send hurricanes to the U.S. to punish us for not stoning our gays to death – this time it’s Cape Hatteras again. Who knew they were such sinners?

Musta’ been a very gay place 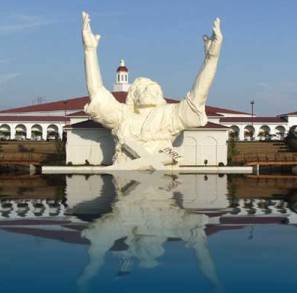 statue of Jesus Christ was struck by lightning and burned to the ground, leaving only a blackened steel skeleton and pieces of foam that were scooped up by curious onlookers Tuesday.

Hey, Pat Robertson! You want to ‘splain what awful sin got Jesus to destroy himself?

Now let’s hear from a ‘man of god’

Pat Robertson. On his show. (There’s video at the link.)

I think we can just hang it up now as a country. This celebration of ignorance we’ve had going in recent decades is fully ascendant.

The Rev. Pat Robertson, on his CBN broadcast today, offered his own explanation of the earthquake in Haiti:

“Something happened a long time ago in Haiti, and people might not want to talk about it,” he said. “They were under the heel of the French … and they got together and swore a pact to the devil. They said, ‘We will serve you if you’ll get us free from the French.’

“True story. And the devil said, ‘OK, it’s a deal,'” Robertson said. “Ever since, they have been cursed by one thing after another.”