About time: Delay officially a felon 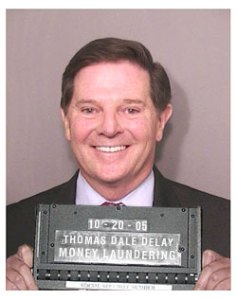 Tom Delay is headed for the big house. His sins were many but they got him on fraud, specifically because he “conspired to launder $190,000 of corporate money into campaign donations during the 2002 election by funneling it through the Republican National Committee. Texas law forbids corporate donations to candidates.”

During the Jack Abramoff scandals, we all learned the shameful details of Mr. Delay’s political life. His worst sin was cruelty; aiding and abetting slave labor in the Mariana Islands on behalf of campaign contributors.  He’s scum.

Dave at The Conservative Lie gives us the definitive history of this man’s sordid history.

“DeLay himself was the recipient of several “free” trips paid for by the notorious lobbyist. One such trip was to the US territory of the Northern Mariana Islands.  DeLay and his family enjoyed some golf and some diving, while immigrant workers, predominately from Asia, slaved away in squalid conditions on the island to make clothes bearing the “Made in USA” label for companies like Gap and Liz Claiborne for about half of US minimum wage.  Workers there enjoy living behind barbed wire in shacks without running water, 12 hour work days 7 days a week and forced abortions.   After the trip, the Hammerdeclared the working conditions in the Marianas “A shining light for what is happening to the Republican Party,” and “everything that is good about what we are trying to do in America and leading the world in the free-market system . . . ”