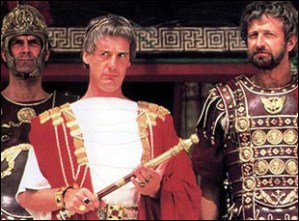 Reporters have been told they will not be allowed to broadcast sound and images from the Tuesday release of Ohio Gov. John Kasich’s budget plan. . . Spokeswoman Connie Wehrkamp says journalists can bring only pens, notepads and tape recorders to the afternoon briefing, where Kasich is to announce the first details of his state spending blueprint for the next two years. She says videos and photos will be prohibited and the audio may not be used for anything but checking accuracy. . . . Members of the Statehouse press corps registered complaints with the governor’s office on the matter. They noted a lack of precedent for such limits on their ability to cover a governor’s budget release.

An invitation-only town hall meeting later Tuesday will be broadcast on government television.

(In most places, ‘government television’ is only available on cable.)

That’s Ohio. Check out what’s going on in Michigan.

Though Gov. Rick Snyder says he is not interested in hurting unions, yesterday’s Senate approval of a package that gives Emergency Managers complete power over financially troubled towns and school districts means he will soon be asked to sign off on measures that are expected to eliminate union jobs across the state.

In a party line vote, and despite impassioned speeches of protest by the body’s Democratic minority, the Michigan Senate approved legislation that threatens to take over and even dissolve local governments that refuse to balance their budgets by breaking labor contracts.

According to the law, which has already been approved in the House, the governor will be able to declare “financial emergency” in towns or school districts and appoint someone to fire local elected officials, break contracts, seize and sell assets, and eliminate services.

Under the law whole cities or school districts could be eliminated without any public participation or oversight, and amendments designed to provide minimal safeguards and public involvement were voted down.

Apparently the mask is coming off today’s Republican Party. They’re not even pretending anymore – tyranny is okay now. And don’t bother them with things like the citizenry.