An interesting graph from a column in the venerable Journal of the America Medical Association (JAMA) : it details who is covered by Medicaid, the program Paul Ryan described as “a hammock that lulls able-bodied people to lives of dependency and complacency”.

The largest group covered by Medicaid by far is children. The second biggest group, adults, contains large numbers of pregnant women. Medicaid covers about 40% of births in the United States. The third largest group includes people who are blind or disabled. That leaves what are known as dual eligibles. Those are elderly people who are so poor that they receive both Medicaid and Medicare benefits.

If I’m reading this chart correctly, while children constitute the largest constituency, the blind/disabled receive the most dollars. 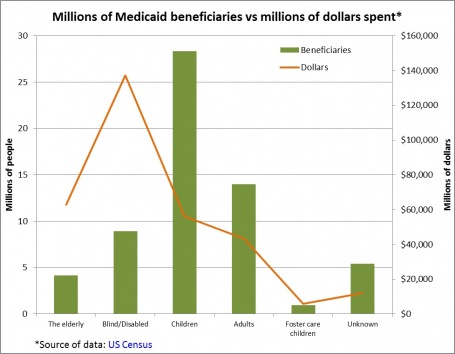 (link is from a Paul Krugman column)

He’s so crooked, he’s a blockbuster movie all by himself. He just escaped indictment last time, although his company was fined $1.7 billion for Medicare fraud. Also, he doesn’t blink. I do not trust people who don’t blink.

(For some weeks, I’ve been trying to write a comprehensive post on my new governor but the stories are popping up with such frequency I can’t finish the thing!)

The good governor is now setting up another sweetheart deal for himself per this at Washington Monthly.

Before inexplicably becoming the governor of the state of Florida, Republican Rick Scott’s most notable accomplishment was pulling off a major health care scam, defrauding taxpayers, and narrowly avoiding a criminal indictment.

That felonious background is of particular interest given Scott’s new scheme to “reform” Medicaid, which may make him an even wealthier man.

The whole story is here.  The company of which he ‘divested himself’ is now wholly owned by his wife. And it’s poised to make tens of millions if the proposed legislation passes.

An oldie. A goodie. My gov.