Wherein I agree with Ron Paul, as any good liberal should do on occcasion

In the eyes of many, I’m sure the police actions in Boston were appropriate because we’re at war with terror, or terrorism, or terrorists. Whatever. I don’t deny the threat but I abhor the notion that this is ‘war’. Anyway, take it away Ron:

Former Rep. Ron Paul said the police response to the Boston Marathon bombings was scarier than the bombing itself, which killed three and wounded more than 250.

“The Boston bombing provided the opportunity for the government to turn what should have been a police investigation into a military-style occupation of an American city . . .  This unprecedented move should frighten us as much or more than the attack itself” . . .

Paul said the scenes of the house-to-house search for the younger bombing suspect in suburban Watertown, Mass., were reminiscent of a “military coup in a far off banana republic.”

Not sure about that coup part, but certainly it looked like a military action.

“Forced lockdown of a city,” he wrote. “Militarized police riding tanks in the streets. Door-to-door armed searches without warrant. Families thrown out of their homes at gunpoint to be searched without probable cause. Businesses forced to close. Transport shut down.”

(Heads up WPressers . . . our blog platform ain’t allowin’ no pictures today. Or maybe WP is just picking on me?)

In the wake of the Newtown killings, writers on the right have suggested we should teach children to turn on their assailants, rushing them en masse. Here’s Megan McArdle writing in The Daily Beast:

I’d also like us to encourage people to gang rush shooters, rather than following their instincts to hide; if we drilled it into young people that the correct thing to do is for everyone to instantly run at the guy with the gun, these sorts of mass shootings would be less deadly, because even a guy with a very powerful weapon can be brought down by 8-12 unarmed bodies piling on him at once.

McArdle is a libertarian. You know, the type who believes you can’t derive Rawlsian-style social justice from self-interested premises—that shit would never work—but that you can adduce from those very same premises a mass death instinct of the sort that powered the Red Army to victory against the Nazis. When it comes to public goods, libertarians think we’re all free riders; in the face of crazed killers, we’re all comrades.

Posted in From Orhan's Perch, guns

The St. Pete Times not only ran the story today about the Koch Foundation buying veto power over the hiring of professors with a donation, but they addressed it editorially as well.

Florida State University’s economics department needs to reconsider its relationship with billionaire Charles G. Koch, who pledged $1.5 million to the school as long as professors hired with the money hew to Koch’s Libertarian philosophy. The arrangement reeks of pandering and undermines academic freedom, the cornerstone of American higher education.

FSU of course agreed to this nonsense – and they did it for a very small endowment of $1.5 million, movie money for the Kochs. Bad decision and FSU should return the money, but of course they won’t. 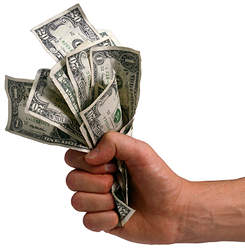 I'm Charles Koch and I'd lke to buy me some teachers.

The St. Petersburg Times tells me this morning that billionaire libertarian Charles Koch dangles needed money in front of college deans and gets his way. He gets veto power over professors for the program he’s funding.

A conservative billionaire who opposes government meddling in business has bought a rare commodity: the right to interfere in faculty hiring at a publicly funded university. . .

In return [for his donation], his representatives get to screen and sign off on any hires for a new program promoting “political economy and free enterprise.”

Traditionally, university donors have little official input into choosing the person who fills a chair they’ve funded. The power of university faculty and officials to choose professors without outside interference is considered a hallmark of academic freedom. . . .

Most universities, including the University of Florida, have policies that strictly limit donors’ influence over the use of their gifts. Yale University once returned $20 million when the donor demanded veto power over appointments, saying such control was “unheard of.”

Jennifer Washburn, who has reviewed dozens of contracts between universities and donors, called the Koch agreement with FSU “truly shocking.”

Said Washburn, author of University Inc., a book on industry’s ties to academia: “This is an egregious example of a public university being willing to sell itself for next to nothing.”

A pubic university, largely taxpayer funded has let a libertarian buy influence on their curriculum. That’s the way the oligarchs do it in Russia.