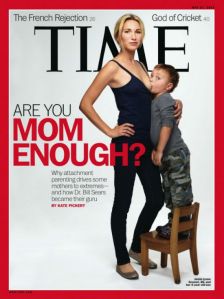 Jon Stewart gave Time what they really were asking for – with a touch of Daily Show photoshopping (close your eyes and remove the chair . . .)

A Lowe’s stunt to pull

Jon Stewart nails it on the bizarre logic behind the Florida Family Association’s complaint against Lowe’s:
Vodpod videos no longer available.

Posted in From Orhan's Perch

Why Balloon Juice is so popular

It’s because John Cole is funny. He understands the power of language and here achieves a bit of typographic brilliance. In a single sentence, he replays a years long narrative. Herewith:

Fox news alerts concerned white people everywhere that there is a new common enemy (not apologizing) for their two minute hate. This time it is rapper Common:

During an appearance on Fox News’ “On the Record,” Palin said, “The White House’s judgment on inviting someone who would glorify cop killing during Police Memorial Week, of all times, you know, the judgment, it’s just so lacking of class and decency.”

Jon Stewart also took up this bit of nonsense last night in what might be one of his top ten takedowns of FOX News. (Conservative readers who don’t follow Stewart should know that Stewart’s really-very-all-the-time-favorite target is CNN.)

Kunstler, once again saying what no one but Jon Stewart says in public:

It was heartening at least to see a few signs of life “out there” in the karmic interstices. Senator Carl Levin of Michigan sent a memo to the Attorney General of the US – viz: something has been going on in Wall Street that merits your attention. As in most seemingly crucial turnings lately, echo answered. Can someone please check to see if Eric Holder over in the Department of Justice is leaking sawdust? He must be stuffed something. Styrofoam would just make him look lumpy. Could he be a computer graphic? Or is he just a simple slab of cardboard with a photo glued on. Perhaps Senator Levin’s next memo might be in the form of a subpoena to Mr. Holder, requesting his testimony as to how many trillions of dollars were snookered, swindled, and Ponzied out of the US public for the benefit of about a thousand guys in and around lower Manhattan (with branch offices in suburban Connecticut and New Jersey).

Skip the chit-chat and go straight to 1:35 into the video. This is from something called “Night of Too Many Stars”, a fundraiser for something that was held sometime somewhere. But who cares really when there’s an opportunity to see Stephen Colbert and Steve Carrell go all song-and-dance-men.

Will FOX News give Jon Stewart his own show?

I just picked this up at Talkandpolitics  (where he’s blogging up a storm today!) – Shepherd Smith and Chris Wallace on FOX News acknowledging Jon Stewart and agreeing with him on the disgraceful behavior of the Republicans in the US Senate, who stopped an effort to provide health care to 9/11 first responders.  I know Smith is only FOX News lite, but Wallace is the real thing and though he is a bit reluctant at first, he finally jumps in with full blown condemnation.

UPDATE: Blogfriend mac has the transcript up here. And here’s the vid (I’m leaving the link up above, in case Comedy Central blacks out this video at youtube.)

I watched it. Most of it. 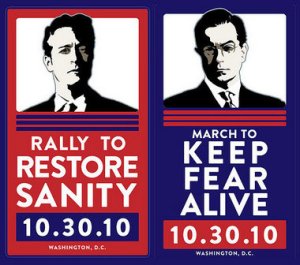 Jon Stewart chose to do his monologue at the close of The Rally to Restore Sanity, rather than at the beginning.

Great move because he sent people away with a pitch-perfect closing. Sane, serious, non partisan, terrific monologue. I hope Comedy Central posts a transcript – I imagine video will be available, but I’d love to have a transcript. If anyone comes across one, please let me know. (He took exquisite aim at cable news, a favorite target of his.)

(One note: I wish he’d used the Daily Show ‘correspondants’ more. I’d love to have seen them all onstage doing maybe a tongue-in-cheek musical number a la the Capitol Steps. That would have been fun.)

Juan Williams: outrage machine cranking up! (and it should)

He spent too much time at FOX and it caused him to forget that it’s not about him.

I bet Rush’s blood pressure is through the roof!

(Full disclosure: I wouldn’t have fired Williams. I think it was overreaction. I would however have fired Sanchez. He broke all the rules.)

UPDATE: Apparently Williams was fired based on violating Section 5, Subsection 10 of the NPR Ethics Code. Here it is. Seems to me one could point to many NPR journos who’ve violated this thing.

10. In appearing on TV or other media including electronic Web-based forums, NPR journalists should not express views they would not air in their role as an NPR journalist. They should not participate in shows electronic forums, or blogs that encourage punditry and speculation rather than fact-based analysis.

Jon Stewart does not heart CNN 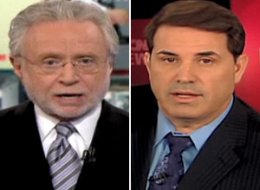 On his show, Jon Stewart has been eviscerating CNN for years (Rick Sanchez was a favorite target, Wolf Blitzer too). Last night on Larry King, Stewart went after the nonsense of CNN’s version of election night coverage with their panel of a dozen people. Were the King show not live (it is, isn’t it?), I’m sure there would have been a bit of snippy-snippy by CNN management.

It’s also interesting that King kept prodding Stewart to say outrageous things about politics and the Tea Party and Stewart resisted – up to a point.

UPDATE: Brian in NYC  tells me embedding is disabled for this video. So here’s the link – hope you can still see it at youtube.

I posted earlier that Jon Stewart would be on O’Reilly Factor tonight. WRONG. He’ll be on tomorrow night. Stewart/O’Reilly Wednesday night. (Sorry.) 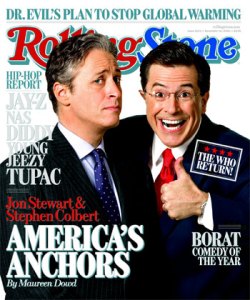 Jon Stewart and Steven Colbert are cooking up some funny. October 30, 2010 – the National Mall in Washington DC. It’s apparently real. Stewart showed some of the signs that will be avilalbe for waving.

MY FAVORITE: “I’m not afraid of Muslims, socialists, immigrants, gays . . . (flip over) but I am kinda scared of spiders”

Ahh, Colbert is on now . . . we will apparently have dueling rallies.

Rally to Restore Sanity: Knock it down a notch for America

Rings true for me

New York Magazine has a lenghty piece about Jon Stewart in the current issue. From it:

“Jon is exactly the same guy he’s always been, only with money,” says Denis Leary, a friend since 1986. “He knows that the moment he really believes he’s important, the funny goes away and he becomes Bill O’Reilly, except shorter and Jewish.”

That sounds about right.

Just before pulling the curtain (for decency’s sake) over the corpse of his show on CNN this morning, Kurtz turned to the media-story-of-the-week, the Jon Stewart/Bernie Goldberg snap-back-athon.  Kurtz – as only he can – managed to edit out Stewart’s most memorable line, the one which took aim directly a Howie’s beloved industry.

Stewart n0w-famously said “I have not moved the comedian box into the news box. The news box is moving toward me.”

Guess which part of that Kurtz edited out?

Per the NY Times this week, The Onion News Network is coming to TV. Yippeee! We’ve been needing a second fake news show because Jon Stewart can’t cover it all. And CNN doesn’t cover it period. So good good good. Unfortunately it will be aired on The Independent Film Channel, which limits the audience. Many of us will not be able to see it in real time, but their web site or Hulu will probably carry it.

“The Onion, the satirical news organization that broke the fake story that the smoke monster from “Lost” would receive its own spinoff series  . . . “

I wonder if it will air in Afghanistan where it is the 174th day of the ninth year of the War.

Something I didn’t know

Hard to believe of course. Here’s something I didn’t know: 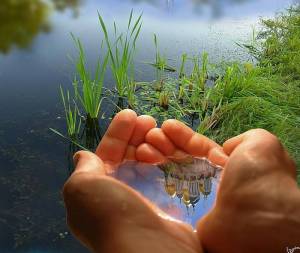 ” . . . it’s notable that despite the claims that all these revelations have seriously damaged the public’s confidence in “climate science,” 54 percent of voters in Republican pollster Frank Luntz’s poll, released on January 21, 2010, believed that climate change is either “definitely” or “probably” occurring, compared with just 18 percent who believed that it is “definitely” or “probably” not occurring. An even larger majority, 63 percent, say they believe climate change is likely caused by humans. So far, at least, the skeptics have lost the larger battle, despite the irresponsible reporting of it in the media.”

From Eric Alterman’s column at American Progress, which I recommend to anyone interested in a reporter’s examination of the issue, the coverage and the known facts. Alterman is primarily a media critic, so go there just for the fun of it. When observing the state of today’s media, he’s kind of  Jon Stewart as an academic, with glasses and a beard. More serious, but just as biting. He’s at The Nation too.

Someone needs to mix it up with Sarah 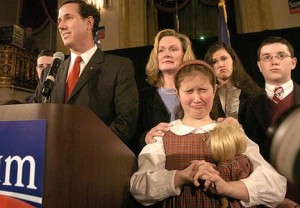 He’s jumping in ole Rick is. He’s a runnin’ for Prez of the US of A!!! Jon Stewart should be on his knees right now thanking god. At last. A target worth the word. And a comedy goldmine.

I know this because Wonkette told me.

In an e-mail and letter to supporters of his Political Action Committee, America’s Foundation, Santorum writes, ‘After talking it over with my wife Karen and our kids – I am considering putting my name in for the 2012 presidential race.’