And now a post in which I agree with George W. Bush’s White House 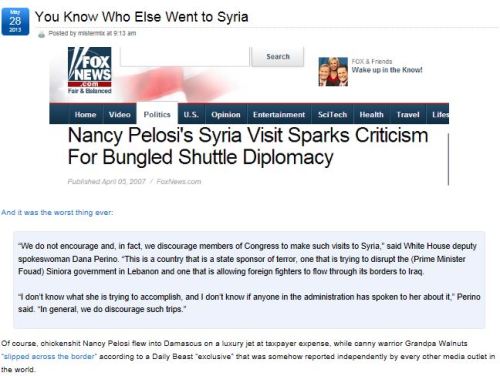 So who’s speaking out this time (except mistermix at Balloon Juice)? Atrios notes that the trip explains why McCain was mysteriously absent from all four Sunday morning shows.

Much been happening around here? I just took a quick look at activity stats and it seems I’ve some catching up to do. Perhaps you’ve noticed the unbloggy bug is going around (election season withdrawal?); I got hit hard but am getting back up on my feet.

One thing I did observe over these recent days is that poor old Grampa McCain  is still railing at anyone and everyone to ‘get off my lawn!’.

But the Sunday gasbags must like that;  he remains the reigning champion for appearances at those (sooo tired) secular services –  I believe it’s 88 times on Meet the Press alone.

I think the old dear needs people to believe that Iraq was a necessary and just war.

Well done John McCain. For that, we’ll get off your lawn

Stand back McCarthy! (and where are Walsh and Wilson?)

John McCain is still that old guy down the street who yells at you. He is still the guy who was willing to risk this country in Sarah Palin’s hands. And he is too enamored of war for my comfort.

Another thing John McCain is? He is one damn stand-up guy.

What’s remarkable about this is that it is remarkable. Where were his colleagues? Who else spoke as forcibly? And publicly? Good on him.  (video posted thanks to Orhan who once again came to the rescue.)

Things only Republicans can say

Implicit in ‘American Exceptionalism’ is that we are different and, yes, better, in the sense that our democracy, our economy and our people have delivered.

But for [it] to truly deliver hope and a sterling example to the rest of the world, it must be demonstrated – not just asserted.

So the Governor thinks we may have slipped down the ladder a bit. Good thing he isn’t running.

AND THIS from Duane:

In response to an assertion from Dick and/or Liz Cheney that President Obama “slandered the nation,” and that he “owes an apology to the American people” for daring to criticize the Bush torture policy while subsequently following Bush-like counterterrorism strategy, John McCain said the following:

“It is very obvious that one of the great recruitment tools that our enemy has is the fact that we tortured people, which is not in keeping with the standards of the treatment of prisoners. We never got useful information as a result of torture, but we sure got a lot of angry citizens around the world, and deservedly so.”

“Deservedly so.” Imagine, if you can, what would have happened if President Obama had said “citizens around the world” were “deservedly” angry at us for torturing prisoners.

Fox News studios would have been awash in a tsunami of mouth foam.

The three amigos – on the road again

Sometimes I wonder what’s going on wtih these three. If you google “McCain Lieberman Graham” dozens of images come up – the trio traveling, the trio partying, the trio politicin’, the trio standing at various podiums. They are always together. And today they’re back in Kabul. Doing something.

Ahh, here’s what they’re doing . . . they went to Afghanistan to have a press conference to criticize Obama’s announced troop drawdown. Because you can’t do that from D.C. And this is just the weekend to criticize the Presdident on foreign soil.

Hope they get some barbeque. And beer. 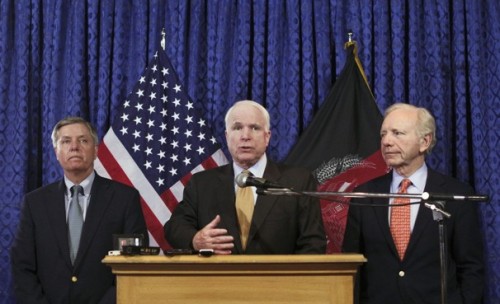 The fine mind of Rick Santorum

Now that Huckabee and Trump are out of the race for the Republican nomination, the real cream is rising to the top. (Today I embrace the cliché.)

He looks so smart!

So here comes Rick Santorum, two-term Senator tossed out by his constituents in horror once they realized what they’d actually elected (he lost to Bob Casey 40% to 60% and it doesn’t get bigger than that in American politics). Naturally, he is running for President and is being taken seriously by the serious people who populate our cable news outlets and their intertubes brethren.

On the Hugh Hewitt radio show, Santorum pushed back against John McCain‘s claim that torture did not contribute to unearthing bin Laden. Transcript via Salon:

HH: Now your former colleague, John McCain, said look, there’s no record, there’s no evidence here that these methods actually led to the capture or the killing of bin Laden. Do you disagree with that? Or do you think he’s got an argument?

RS: I don’t, everything I’ve read shows that we would not have gotten this information as to who this man was if it had not been gotten information from people who were subject to enhanced interrogation. And so this idea that we didn’t ask that question while Khalid Sheikh Mohammed was being waterboarded, he doesn’t understand how enhanced interrogation works. I mean, you break somebody, and after they’re broken, they become cooperative. And that’s when we got this information. And one thing led to another, and led to another, and that’s how we ended up with bin Laden.

I’ve liked him ever since he stepped into Defense after Rumsfeld. It was so reassuring to see an adult without a personal agenda and very little ego showing. He was in the Bush administration, but not of it. And now, as the Senate Armed Services Committee takes testimony from him and the Joint Chiefs chair and others, I like him even more.

And I like Admiral Mullen. It’s nice for a change to hear people in our government talking with conviction about ‘doing the right thing’. Don’t hear that often these days.

Oh. And John McCain needs to go home and check out the early bird specials. He should also probably be there to chase kids off his lawn.

Heads up! Time for McCain to have at ‘teh gays’ again.

This man is afraid of something –  in his heart or in his past. He’s deaf and blind to what’s around him. Therre will be a chance to see that up close yet again, when the Senate Armed Forces Committee meets on Thursday and Friday of this week.  Fire up yer’ CSpan and pop yer’ corn!

The Pentagon’s study on the impact of repealing DADT was released today. Predictably, those currently serving are fine with it. I’m sure the numbers are different among the senior officer corps, but among the enlisted? No prob.

The Senate Armed Services Committee will hold hearings on the report on Thursday and Friday, with Defense Secretary Robert Gates, Chairman of the Joint Chiefs of Staff Admiral Mike Mullen, and top members of the Army, Navy, Air Force and Marines all testifying. Leading the charge against repeal will be John McCain (R-AZ), the ranking Republican on the committee.

McCain, who has apparently decided to make his lasting legacy be that of the last man standing against the civil rights issue of the twenty-first century, will presumably continue to argue that violating Americans’ 14th Amendment rights isn’t a problem.

Those Dems never had to meet a payroll!

I heard that tired old talking point, a charge leveled against Rep. Mike Castle (who lost the  Delaware primary) – heard it on one of the talking head shows – to make the case that Christine O’Donnell was the  better candidate. Did the Dem challenge it? Of course not. But it would have been so easy – a cursory google or wikipedia check reveals that while O’Donnell listed herself as a self-employed marketing consultant there’s no evidence of that. All of her jobs, whether paid or unpaid (could have involved marketing activity as nebulous as that phrase is) have been with political organizations or conservative advocacy groups. Can’t find a single private sector (or for profit) job in her resume.

Here are some other Republicans who have never had to meet a payroll:

GOP presidential candidate 2008: John McCain  – never had to buy health insurance either. Grew up in military, served in military, went to Congress. Public tit all the way. Never had a private sector job or met a payroll.

Former Speaker of the House: Newt Gingrich – grew up military, taught at state college, went to Congress. After Congress, it’s all non-profit advocacy organizations along with ‘fellow’ status at conservative think tanks to pay the bill. He is lately peddling Newt Inc, so that’s private I guess. But government tit till he was bounced by his party from the leadership for being a bad, bad boy.

Senator from Kentucky and Senate Minority Leader: Mitch McConnell – military and Congress all the way. No private sector. No payrolls. Solid government tit.

There are no doubt plenty of Dems with the same resume. But they’re not accusing their opponents of ‘never having met a payroll.”

John McCain is already throwing wild accusations at the NYPD and the FBI apparently. He’s afraid that police agencies followed police procedures. The Miranda thing you know. Plus, they’re not doing what he would do.

” . . . this Miranda-related demagoguery is growing stale.

“Najibullah Zazi was Mirandized, and the entire case went beautifully. Umar Farouk Abdulmutallab was Mirandized, and the results have been excellent. When shoe bomber Richard Reid was taken into custody, the Bush/Cheney administration read him his rights five minutes after he was taken off the plane he tried to blow up, and McCain never said a word. It’s been standard practice, especially with American citizens upon their arrest, for years — spanning administrations of both parties.

“Can’t McCain just let the grown-ups do what they do without offering suggestions from the peanut gallery? The Joint Terrorism Task Force caught the suspect 48 hours after the attempted bombing; the frequently-confused Arizonan should probably trust them to know how best to proceed.”

Why should he stop now?

Ah, it’s that ‘always-a-candidate-never-a-President’ John McCain of Arizona, brought to us by The Capital Steps.

There he is, the Senator from Arizona, much beloved of the pundit class because someone in 1998 called him a maverick and this is such a sexy word that not a one of them could stop from saying it whenever they cast their adoring eyes to the man himself.

I've got mine. Now get off my lawn!

The man who spends most of his Sunday mornings on television. Because they just cannot.get.enough.of.him.

The man who is on the floor of the US Senate right now, railing against expanding access to health care to all Americans.

The man who has been on the guvmint’s health care tit his entire life. His entire life. From his childhood in a military family to his own military career to his career in politics. The man has been on government health insurnce and/or care his entire friggin’ life! (I know, I know, he spent five years as a prisoner of war. He is one of thousands who have done so. My uncle spent about three years.)

And now comes to the floor a Republican of Wyoming – he is outraged that the Dems’ damn guvmint run health care wouldn’t have given his wife a mammogram and she would have died!  Why doesn’t their program include mammograms dammit? But even more important, there shouldn’t be any damn guvmint program!

Deep stuff. Deep stuff.  I think we should all listen to John McCain all of the time, because he was a prisoner of war and he is a maverick.

Not hearing much talk about ‘prisoners of war’ on either side in Afghanistan, where it is the 146th day of the ninth year of the war.