Frackin’ good! (and better than fracking)

When I see this, I hear a page turning:

Walmart has been adding solar to scores of stores across the country . . . as it plans to become 100 percent renewably powered. . .  The company has aggressively been building out solar on its stores and other buildings.  It’s also been boosting its purchase of renewable energy both directly and indirectly. And it is doing so across the world.

Yeah, but who has the Congress critters firmly in their deep, deep pockets?

Gas explosions for profit or bombs for ideology. One good. One very very bad. People still dead. Threat still there. How to choose, how to choose . . . XL baby, XL!

Today, Upworthy brings us a video by activists opposed to the construction of a fracked gas pipeline under the West Side of Manhattan. It includes footage from a PG&E gasline explosion at a similar installation in San Bruno CA. In 2010. Eight dead. 38 Homes leveled. It happened two miles west of San Francisco International Airport. And I never hard of it before.

Did you? From Wikipedia:

In January 2011, federal investigators reported that they found numerous defective welds in the pipeline.  . .  . On January 13, 2012, an independent audit from the State of California issued a report stating that PG&E had illegally diverted over $100 million from a fund used for safety operations, and instead used it for executive compensation and bonuses.

It’s an all too familiar story.

This graphic shows the blast zone that would be created if an explosion similar to the one that occurred in San Bruno, CA, last year were to happen in Manhattan at the location of the natural gas pipeline proposed for the city by Spectra Energy.

But back to New York, the city that never sleeps . . . the pipeline, already under construction, is the project of Spectra Energy. Were their project to suffer an explosion like San Bruno, or like the dozens of others that have happened around the world, it could kill tens of thousands, maybe maim hundreds of thousands, and might even take down the economy of NYC.  The Federal government is spending hundreds of billions, perhaps a trillion or more, to keep us ‘safe’ from terrorists. But developing alternate energy sources is too expensive.Here’s that video from Upworthy:

Sure, circumstances are different – maybe a lot different – here than there. But the single most important thing they did was decide to do something. And they went from there.

Portugal’s electricity network operator announced that renewable energy supplied 70 percent of total consumption in the first quarter of this year. This increase was largely due to favorable weather conditions resulting in increased wind and water flow, as well as lower demand. Portuguese citizens are using less energy and using sources that never run out for the vast majority of what they do use.

. . . Portugal’s investment in modernizing its electricity grid in 2000 has come in handy. Like in many countries, power companies owned their own transmission lines. What the government did in 2000 was to buy all the lines, creating a publicly owned and traded company to operate them. This was used to create a smart grid that renewable energy producers could connect to (encouraged by government-organized auctions to build new wind and hydro plants).

And then there’s this – surprising, and very hopeful:

Other countries have been making steps of their own on renewable power production. The U.S. had a record-breaking year for wind energy in 2012, growing by 28 percent. Sweden is looking to have no dependence on oil by 2020. Australia could be looking at 100 percent renewable energy by 2030. Global solar power world will soon be a net-positive energy source.

This is not a suggestion. This will happen. Full story here.

The Obama administration announced strict new fuel-efficiency vehicle standards Tuesday, requiring the U.S. auto fleet to average 54.5 miles per gallon by 2025, an uncontroversial move that, unlike other administration energy policies, was endorsed by industry and environmentalists alike.

[will] expand on existing standards requiring American-made cars and light trucks to average 34.5 mpg by 2016. They will significantly cut U.S. oil consumption and greenhouse gas emissions by the time they are fully implemented, according to EPA.

A Rhode Island company plans to begin construction in 2014 on the Atlantic coast, of the US’s first offshore wind farm.

“We are like tenant farmers chopping down the fence around our house for fuel when we should be using Nature’s inexhaustible sources of energy — sun, wind and tide. … I’d put my money on the sun and solar energy. What a source of power! I hope we don’t have to wait until oil and coal run out before we tackle that.”    Thomas Edison.

He doesn’t care what the gas really costs. War makes him feel all triumphant but gas prices make him feel like a victim. From Anderson at the Houston Chronicle: 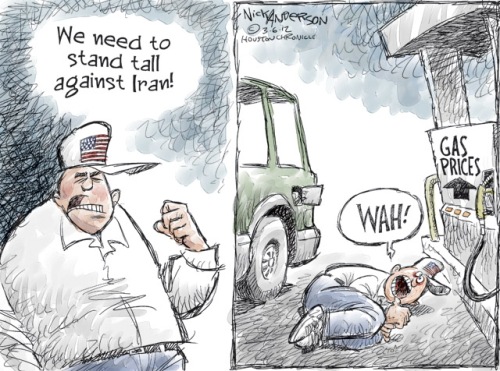 It’s remarkable my country could afford to do this after the $500 million in loan guarantees to Solyndra, because I thought – besides being !European!Socialism! –  it busted us. FOX News told me so.

The Obama administration has offered the Vogtle project $8.3 billion in federal loan guarantees as part of its pledge to expand nuclear power.

So sayeth Republicans in the 112th Congress.  Because there’s nothing else going on this week.

House Republicans plan to bring to the floor next week legislation that would water down a provision in a 2007 energy law that requires light bulbs to be more energy efficient . . .

Barton’s Better Use of Light Bulbs (BULB) Act would repeal a provision in the Energy Independence and Security Act of 2007 that requires traditional incandescent light bulbs to be 30 percent more energy efficient beginning in 2012.

This Rep. Barton, ardent creationist and perennially anti-science in all its manifestations:

. . . The first question from C-SPAN’s moderator: “What causes, in your perspective, global warming?” Barton’s reply: Well, the short answer would be God.

The House Committee no doubt was forced to act upon discovering to their horror that the 2007 law was totally part of a socialist-terrorist-loving-faggot-elite plot.

“Your lungs or your job.”

This morning, I heard a fascinating panel discussion on US-Canada relations. David Frum, former Bush guy, was among those on the dais, so I decided to stop over at Frum Forum which I do from time to time because he is not crazy. Found this just now – we are truly moving into upside-down-land.

CLEAN AIR ACT UNDER ATTACK . . .  the new chair of the House Energy and Power Subcommittee, Ed Whitfield (R-KY) thinks that some dirty air is okay and is not afraid to say so.

In a recent interview with National Journal Daily, the coal state Republican talked about his desire to roll back provisions of the Clean Air Act, saying:

This is a much broader issue than the health of the American people and lungs and emphysema; it’s how can we balance that in the global marketplace for jobs.

Your lungs or your job. Is that the trade-off that Whitfield is asking American voters to accept? There likely wouldn’t be many takers.

I hardly know who to watch in this new Congress. There’s such a delicious choice.

Oil. Obama. What he did. What he said.

ORLANDO, Florida (CNN) – Barack Obama said Friday that he would be willing to compromise on his position against offshore oil drilling if it were part of a more overarching strategy to lower energy costs.

“My interest is in making sure we’ve got the kind of comprehensive energy policy that can bring down gas prices,” Obama told The Palm Beach Post early into a two-day swing through Florida.

“If, in order to get that passed, we have to compromise in terms of a careful, well thought-out drilling strategy that was carefully circumscribed to avoid significant environmental damage – I don’t want to be so rigid that we can’t get something done,” Obama said.

He later said he didn’t believe that drilling would bring down oil prices in the short run after all. But he never changed his mind about being willing to do some drilling if it were part of an overall strategy.

This newest announcement doesn’t mean he’s caving or trying to make deals with Republicans – because Repubs aren’t the people he has to negotiate with on this one. It’s the energy sector. It’s the guys who met with Cheney. That’s the crowd he’s working.

Having just watched the 12-month health care roll out, I choose patience on this one.

Posted in Current Events, The President-who-is-not-Bush