Was reminded of this bit of history at Hullabaloo today. (It’s from here.) Remember Alan Grayson, the one-term gajillionaire firebrand rabble-rouser Democratic FL Congressman? The one who regularly took to the floor of the House to chew up and spit out the special interests?  The one who caused thousands of lobbyists to develop gastro intestinal disease? Yeah, that one. (video below)

He was one of the first victims of an unrestricted opening of the spigots of corporate money in a congressional race. According to a Politico article late in the campaign in 2010, almost 20% of all of the independent expenditures in House races in the entire country were deployed against Alan. His district was flooded with an unrelenting radio and television smear campaign by the corporations who didn’t appreciate his hard work on behalf of consumers and workers. The average person in Orlando saw 70 negative ads against Grayson– $2 million of which was paid for by the Koch Brothers, $2 million by the health insurance industry and another million from the NRCC. The cash that flowed into the district from the Chamber of Commerce and Rove’s band of cutthroats was a direct response to Alan’s reform efforts on the House Financial Services Committee and because he was the most effective national Democratic spokesperson in Congress. The DCCC, of course, offered him no help whatsoever in defending his seat. [Dems didn’t want to fool with the banksters either – who would have financed their campaigns?)

Who needs citizens when we have Citizens’ United 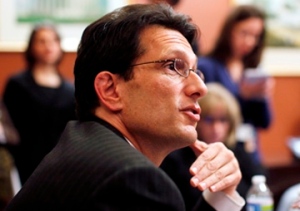 I must admit I never saw this coming. But then why not? We might as well go the rest of the way in corporatizing our government, er,  I meant our elections.

” . . .  the House will vote next week on legislation that would end public financing of presidential campaigns and national party conventions.

The program, which Congress enacted during the aftermath of Watergate, is funded via voluntary $3 contributions when taxpayers file their annual federal income taxes. . . . Eliminating the program all together would save taxpayers $520 million over ten years.” (oooohhhh, $52million a year! )

In the understatement of the year, the story concludes:

It’s unclear how eliminating the program will actually make a dent in the federal deficit, since taxpayers voluntarily contribute cash to the effort.”

In other news, Elvis* is still dead

What a delight to come home from a thrilling evening at the theatre and see Kevin Drum on the Moyers show. I’ve never seen him before, although I began reading his stuff a decade ago, when he was one of my early blogstops. At his then blog, CalPundit, he originated the practice of “Friday Cat Blogging” – now widely imitated. HIs beat, then as now, was current events. He’s been at Mother Jones for a few years now and he, along with David Corn of the same magazine were Moyers’ guests tonight.

As usual, a terrific and informative hour. About the financial services industry, about Geitner (his chief of staff is a former Goldman Sacks lobbyist – good god!) and Bernanke and Obama and what needs to be done and isn’t being done. And about how thoroughly that industry has the Congress doing its bidding. It’s a grim picture and Drum pointed to the failure of the media, the business press in particular.

Another great show from that commie, pinko, faggot, anti-American Baptist minister. Thank goodness he’s retiring and we won’t have to hear any more of this nonsense. We have better things to do.

* And it’s Elvis’ 75th birthday today. Maybe he would know what to do.