The House GOP’s debt limit bill — obtained by the National Review — isn’t a serious governing document. It’s not even a plausible opening bid. It’s a cry for help. In return for a one-year suspension of the debt ceiling, House Republicans are demanding:

It’s tempting to think that this is Boehner teaching his conference a lesson. They told him what they wanted, and he’s going to let them have it — good and hard. House Republicans are walking into the debt-ceiling negotiations with an opening bid that makes them look ridiculous. This looks like an Onion parody of what the House’s debt-ceiling demands might be. It’s a wonder it’s not written in comic sans.

There’s a memo every Monday

It’s a little known fact that the Office of the Speaker issues a memo every Monday morning assigning specific tie colors – by day, by staffer – so that there is no duplication of the under-the-chin-pastels. It’s working quite well. 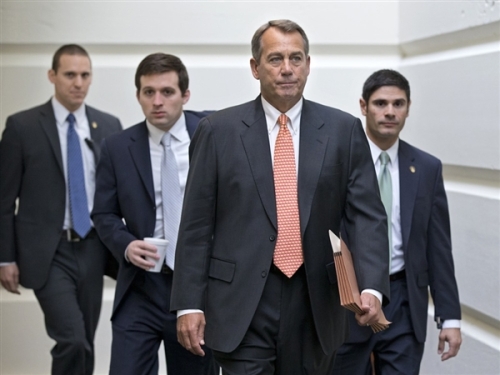 Boehner is an ass

But I do notice that he’s been cutting down on the insta-tan lately. Which has to count as a good thing.

He’s on the floor of the House. Health care is going to pass and the world is going to end. Let us see what procedural wrench he will try to throw into the works now.

Boehner is a joke

House Minority Leader Boehner finally has his beloved health care negotiation out in the public sphere. For almost a year, he’s been condemning the White House and the Dem majority (the ones we elected) to stop meeting ‘behind closed doors’ and make the negotiations public, where the American people could see them.

Finally, as they always do, the Democrats capitulated, although not exactly the way Boehner wanted it. He calls tomorrow’s meeting “a six-hour taxpayer-funded infomercial on ObamaCare”.

Perhaps Mr. Boehner could explain to me what exactly was the way he wanted it?

As Chris Bowers said: I see.

Lifted in its entirety from Open Left:

If the President intends to present any kind of legislative proposal at this discussion, will he make it available to members of Congress and the American people at least 72 hours beforehand?

So, four days later, the White House accepted this demand, and announced it would post a legislative proposal online more than 72 hours before the summit:

Since this meeting will be most productive if information is widely available before the meeting, we will post online the text of a proposed health insurance reform package.

So, naturally, the next day, Boehner attacked the White House for giving into his demand:

“A productive bipartisan discussion should begin with a clean sheet of paper,” Boehner said in a statement.