In comments below, talking about Obama, mac just reminded me of a dialogue he and I had in June of 2010, after he posted 10 reasons Obama is quitting in 2012. I just re-visited the post – quite prophetic and a must read – our conversation back then is eerily accurate, given that it was only 15 months into the presidency. (I am surprised that I’d had so many misgivings s0 early –  I’d actually forgotten.)

I think mac got it right in all ten points, except for thinking that it would be Obama’s decision not to do a second term. If there’s no second term, the decision will not have been his.

Upworthy is a new shared site. I really don’t know how it works, but I like it a lot. The stuff that pops up there takes a bit of a sideways look at “content that is as fun to share as a FAIL video of some idiot surfing off his roof.” 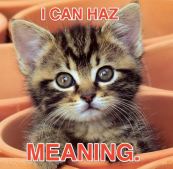 . . . we believe the things that matter in the world don’t have to be boring and guilt-inducing. And the addictive stuff we love doesn’t have to be completely without substance.

Here’s something important from over there that’s rarely  mentioned outside the usual wonky sites. Nice to see it somewhere younger people might visit:

We already know that 90 percent of the media is controlled by six companies, 37 banks have been consolidated into four, 307 types of corn have been reduced to 12, and these 10 companies own practically everything else. What’s next? 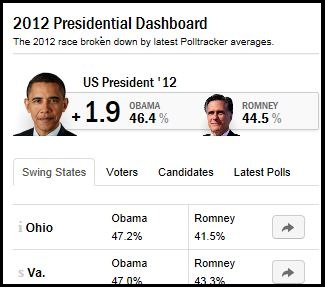 The season is almost upon us and Talking Points Memo has very thoughtfully launched a new site, PollTracker, that features – are you ready bloggers? – a Presidential Dashboard! Great stuff – all the polls, all the breakdowns, the latest in the swing states.

I was surprised to Obama leading (sometimes only by a nose) in all 12 swing states. Today, anyway. I expect to visit often. And so should you.

To the left is my first blog post – from 2009. It was an homage to Atrios and below is his first in 2002. Atrios was annonymous for the first years but was eventually revealed to be one Dr. Duncan Black, an economist in Philadelphia. From the first, he was

the essential read in the lefty blogshpere. His pitch perfect (and utterly original) language inversions and his economy of words elevate him – in my lights – to Mark Twain and Will Rogers territory.

Today, he will post the winner (#1!!) in his top ten countdown to the Wanker of the Decade! Also today, I say to him congrats and thanks for a decade of delicious stuff.

(Wikipedia says the traditional gift for a Tenth Anniversary is tin/aluminum. Anyone know where I should send it?)

I’m right here! Look over this way! Here I am!

I’m an old fan of Bartcop  and once in a while I jump in to try to provide the correct answer to one of his ‘mystery cities’ or ‘mystery cars’ quizzes . . . Yesterday I got one! The “mystery food”. A little thrill for sure, but check the name:

For those not familiar, Bartcop has been around since the 90’s posting cartoons, commentary and quotes from around the web, plus original stuff – including some wicked funny and original photoshopped offerings. A fine place to lose yourself for a few minutes every day.

Two years ago, I got linked from Bartcop (one serious OMG moment) and on that day racked up a record number of views – a number I’ll never reach again. This time though, no linkee. 😦 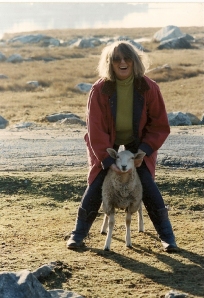 My lamb Pinky. Back when.

Liberal fans of the blogsphere probably know Kevin Drum. He launched his independant blog Calpundit around ’02. He later moved to Washington Monthly, where he wrote Political Animal, and a few years ago took up residence at Mother Jones.

The most important thing to know about Kevin Drum is that he invented Friday catblogging (now an actual verb). Before Atrios’ normal and handsome cats began making regular appearances, or the  intoduction of John Cole’s appalingly fat cat Tunch (who now has his own product line) – even before TBogg and his bassett hound  – Kevin was showing us the kitters every Friday.

Turns out we have something surprising in common. He posted this yesterday:

Is this an exaggeration? Only barely. I remember occasional shreds from years past, but that’s about it. On the bright side, this means that if I had a nasty fight with you a few years ago, there’s a good chance I have no memory of it. On the not-so-bright side, it means that if we were close friends in high school, I might or might not even remember knowing you, let alone remember anything substantive about what we did together.

Most people don’t believe that an otherwise intact person can have such a profound disability – and I do consider it that, though not the kind that gets one special treatment. In fact, I’ve never met another person whose memory is as lacking as mine.

I sometimes slight people or insult them or even astonish them. It didn’t go down well the time I forgot I’d been an attendant at the wedding of a woman I saw at our 30th HS reunion. I still don’t remember that. I’ve since learned to fudge and be non-committal – I let the other person do the remembering. I figure they’ve probably got it right, so I nod my head. It covers the awkward moments anyway.

Adding to what Kevin said . . . before my father died at 98, I used him as my resource in matters of memory – I turned to him for dates and names and chronologies. He never forgot anything. Like Kevin’s mother, to the day he died he was able to recall all of his schooling, teachers, classmates. I’m kind of jealous of that.

Posted in Blogsphere, Family and Friends, Getting old 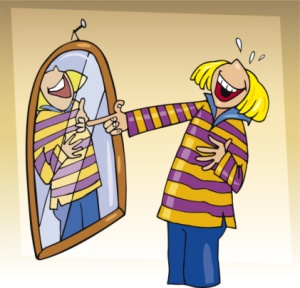 END_OF_DOCUMENT_TOKEN_TO_BE_REPLACED

That’s the name of Glenn Beck’s spicy seditious blog where gather all his acolytes so get alerts on what to be afraid of whenever they can’t catch the show.

Some time ago I noted with unexpected sadness the passing of a fellow blogger, a man I’d never met and with whom I’d only recently become acquainted. His name was Jim and he blogged as The Hippie Professor. A college professor, a musician, a proud father, a patient and thoughtful man, he was steadily building a readership. And then one day the posts simply stopped; some weeks later, a personal friend of his came into a comment thread and told us that Jim had died – a sudden and massive heart attack.

Word quickly spread around our little blogging community and the thread where John had told us about Jim’s death grew. And grew – as people stopped in and wrote their condolences and appreciations of this fine man. Recently one  of his daughters stopped in to say that reading that thread – words from people known only to her father – was very comforting to the her and her family. She said that they stop in from time to time and they are very touched to see how many people her father touched.

Yesterday, a new comment appeared in another  thread, from February of last year.

The post in which it appeared had mentioned Sarah Palin and her scorn of what she called  ‘that hopey changey thing’.  Here’s part of what Jim said in that post:

Classic Jim – a fine and thoughtful man. Kind and caring.

So as I said, this new comment appeared yesterday – below those fine words. And it was generated by one of those bots, some kind of targeted robotic spam a  cellular accessory. Or something.

These things pop up in blogs all the time – like weeds in a garden. Those weeds get pulled regularly – unless there’s no blogger there to do it.

Jim’s blog is now an orphan – unprotected. The vultures are free to move in. The weeds will take over. A beautiful and fine thing, built lovingly over the years, is falling victim to the elements of the blogsphere which is bigger than any of us. Impersonal and cruel.

Posted in Blogsphere, Family and Friends

A friend is gone

Some of you who visit here may also have made the acquaintance of a fellow blogger, The Hippie Professor.

Alan Scott, a frequent commenter at both places, just gave me the news in comments that hippiprof passed away over the weekend. A friend of his posted the news into this thread, where people are leaving condolences.

He was a new blogfriend. I’m quite  stunned and I miss him already.

Posted in Blogsphere, Family and Friends

Happy birthday to me

Tomorrow, this blog turns one year old. In that time I’ve made some fine new friends, founds lots more who love to argue which suits me fine, learned a lot about myself and also about how much I still need to learn. I’ve rediscovered some of the music of my youth . . . . it’s been a wonderful year and I’m grateful to those of you who have made a habit of stopping by. Like any blogger, I crave comments – keep leaving them and I’ll keep the chat going.

HERE ARE SOME  NUMBERS FROM THIS FIRST YEAR:

So happy birthday to Whatever Works. (And lordy, lordy, lordy, I wish I’d known about the Woody Allen movie of the same title before I launched the blog. But so it is, as the late Linda Ellerbe used to say.)

This is wonky as hell, but I think it says that left-leaning blogs are more, um, democratic. They are much more collaborative for instance, where right-leaning blogs are more sole authors. The study looked at the top 155 political blogs. (I think the link is a summary of a longer (and no doubt wonkier) paper on the way the left and the right blogsphere differ in terms of their use of the available technology.)

Sites on the left adopt more participatory technical platforms; are comprised of significantly fewer sole-authored sites; include user blogs; maintain more fluid boundaries between secondary and primary content; include longer narrative and discussion posts; and (among the top half of the blogs in our sample) more often use blogs as platforms for mobilization as well as discursive production.

The graphic is a bit fuzzy – a bit clearer at the link. 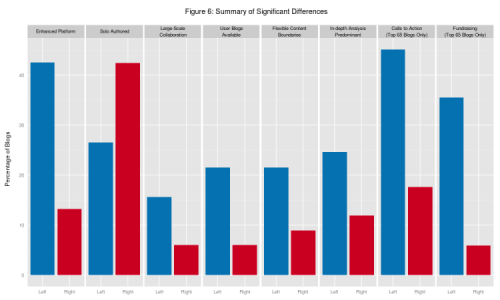 Ah, we hardly knew ya’

Since I began this  blog in September, I’ve found some wonderful other blogs and websites. And I’ve seen a few real favorites shut down too. It was hard some months ago to lose Prehistoric Rocket Science just a week or two after I found it – to my utter delight. And now another – new to me in recent weeks and about to become one of my daily stops – Clips and Comment. Both gone now. They will be missed.