I’ve got half an ear to Chris Matthews from earlier today. Because Bill Clinton is in the news (he’ll be nominating Obama at the convention) Matthews has seized the opportunity to – over and over again – call Clinton “the Big Dog”. At one point, I actually heard him say “the Big Dog, that’s what we call him now!”

That’s what we began calling him sixteen years ago Chris.

Another “I laughed out loud” moment

I’m not a fan of NY Times columnist Gail Collins, nor do I often read her. But last week I did – from that column, an image for the ages:

I once rode in a car with [candidate] Bill Clinton, during which he gave a non-stop disquisition on highway funding that I found a little disjointed until I looked up and noticed that he had actually nodded off and was talking in his sleep.

Clinton to a “T”. Under the political charm offensive, there was always a wonk.

Still believe in The Heritage Foundation?

Will the apologists for our emerging American oligarchy try to talk their way around even this?

For those who don’t know, here‘s who they are:

Heritage’s stated mission is to “formulate and promote conservative public policies based on the principles of free enterprise, limited government, individual freedom, traditional American values, and a strong national defense”.

They think we’re not doing so well.  And in case you didn’t know, here’s who they are:

Heritage is primarily funded through donations from private individuals and charitable foundations. Businessman Joseph Coors contributed the first $250,000 to start The Heritage Foundation in 1973. Other significant contributors have included the conservative Olin, Scaife, DeVos and Bradley foundations.

Those are family foundations, very very conservative family foundations that provided much of the funding for the anti-Clinton crusade of the 90’s: the eternal Paula Jones lawsuit, the fake Whitewater ‘scandal’ – even personal financial support for the public accusers around the Monica Lewinsky scandal.

They are also drivers of a new American oligarchy.  Putin would love them.

Dear elvis, look how Obama has spent all our money!

In an earlier post, kitchenmudge asked if this nation ever had a balanced budget. I don’t know, but this post says the last time we did it was 1957.  He has some nice clean tables there. In this one, note that the deficit went down every one of  Clinton’s 8 years in office and it went up in 7 of 8 years of George Bush. Say no more. 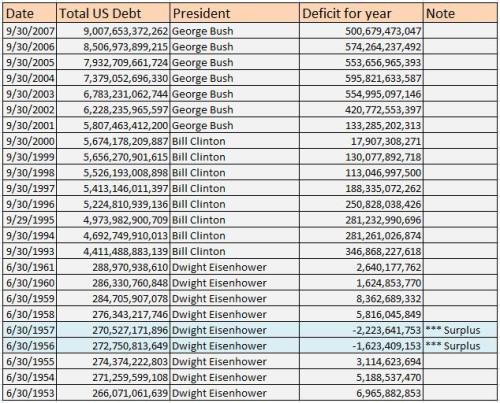 And this is a good summary of historic trends in our debt; it sounds like any law demanding a balanced budget would preclude our ability to go to war since wars are always fought on borrowed money. I’ve faulted GW Bush for that, but the real problem was that he simultaneously implemented huge tax cuts.

The United States has had public debt since its inception. Debts incurred during the American Revolutionary War and under the Articles of Confederation led to the first yearly reported value of $75,463,476.52 on January 1, 1791. From 1796 to 1811 there were 14 surpluses and only 2 deficits. The first dramatic growth spurt of the debt occurred because of the War of 1812. In the first 20 years following the War of 1812, 18 surpluses were experienced and the US paid off 99.97% of its debt.

The second dramatic growth spurt of the debt occurred because of the Civil War. The debt was just $65 million in 1860, but passed $1 billion in 1863 and had reached $2.7 billion following the war. In the following 47 years America returned to the practice of running surpluses during times of peace experiencing 36 surpluses and only 11 deficits. During this period 55% of the US national debt was paid off.

The next period of major growth in debt came during WWI reaching $25.5 billion at its conclusion. It was followed by 11 straight surpluses and saw the debt reduced by 36%.

A lesson from history. I doubt it’s lost on Obama.

The video below is the panel discussion on a pending government shutdown from PBS’ Washington Week show broadcast on November 17, 1995. It’s a fascinating example of the old adage “the more things change, the more they stay the same”.

The arguments were very much the same as today. The debt was a huge issue for the public; the debt clock had just been erected in Times Square and Ross Perot ran for President on the problem of the debt – he got almost 20% of the vote, which for a third party candidate in this country is enormous.

In that debate fifteen years ago – as seen by politicians and pundits –  Clinton was seen as a compromiser and Gingrich as strong and unmovable. Gingrich’s House had made ‘compromise’ a dirty word which pleased the base in those days. The House Republican freshmen and sophomores were largely new and from outside government. They ran on standing firm about the budget and  social issues, which were more dominant than today – the Religious Right had serious power.

The final outcome? Clinton won the public’s vote; at the end of the battle, he was more popular than he’d been when it began. Republican numbers plummeted and the journey to Gingrich’s ultimate disgrace had begun. Of course, neither Newt nor his congress were done. They went on to impeach Clinton, but he came out of that one even more popular.

Bill Clinton not only bested Gingrich – he beat the national debt too.

It appears Big Dog is again paying the price for those Big Macs he loved so much. Most of us can sympathize with the urges to eat stuff that isn’t good for us. Or smoke it or drink it. Or maybe act it out. We are so imperfect; sometimes life is defined by the struggle to control self destructive behaviors.

When Clinton stopped into a D.C. MacDonald’s during a ‘jog’ in the first months of his presidency, people related. Then after his by-pass he began doing what he should have been doing all along. The fat fell off, he got a spring in his step and the red flush wasn’t as visible on his face.  Example is a powerful teacher. An entire generation grew up with Clinton as president – they’re around 30 now. I hope they’re paying attention.

And I hope they’re paying attention to the fact that it’s the  126th day of the ninth year of the War in Afghanistan.