When (perhaps ‘if’ but I’m not hopeful) Iraq dissolves and brings eastern Syria and Kurdistan with it and the region falls into a few more decades of war, I will remember Paul Wolfowitz assuring the Senate before our 2003 invasion that ‘there is no history of sectarian violence in Iraq’. Really, he said that. In a neighborhood where sectarian war has been the norm for  a thousand years. He said that.

I think it’s safe to assume we’ll not be bothered anymore by the odious Liz Cheney. Seems nobody cares what she thinks.

Cheney, like her father, is an unapologetic neoconservative who favors muscular use of American military power overseas, a policy that does not sit well with many grassroots conservatives, particularly in the libertarian-leaning West.

And so it began ten years ago tomorrow.

This week Brown University (another bastion of liberal lies and anyway, it’s un-American since it was founded before the American Revolution) published a comprehensive study of the costs – in blood and treasure – of our adventurous invasion of the sovereign nation of Iraq. (The full report is here. It’s broken down by subject – dollars, lives, politics etc.)

According to the report, the war has killed at least 190,000 people, including
men and women in uniform, contractors, and civilians and will cost the United
States $2.2 trillion.

Among the group’s main findings:

Dont know if they touch on this, but neither electricity nor oil production has reached pre-war levels yet. And there is that business of Iraq now being a Shia ruled country aligned with Iran. But Cheney et al got their blood. So there’s that.

We’re coming up on a tenth anniversary so Kevin Drum remembers Paul Wolfowitz.

Like Drum (inventor of Friday Catblogging at Cal Pundit, founding blogger of Political Animal at Washington Monthly and now at Mother Jones – I’m a long time fan), I too remember Wolfowitz. I watched him testify to Congress advocating for the invasion of a sovereign nation. He told them war in  Iraq was unlikely to cost more than three billion, and, anyway, Iraq could easily repay that from oil revenues he said. Remember? A great moment in Congressional testimony. Drum sums it up:

Paul Wolfowitz’s “fanciful” testimony before Congress, of course, had come a week earlier, when he told Congress that Eric Shinseki’s postwar troop estimates were “wildly off the mark”; that there was no history of ethnic strife in Iraq; that Iraqi civilians would welcome an American-led liberation force; that “even countries like France will have a strong interest in assisting Iraq in reconstruction”; and that published estimates of the costs of war and rebuilding were way too high. It was an epic tour de force of wrongness, quite possibly the wrongest war prediction since Allied generals figured that troops would be “home by Christmas” after the start of World War I.

The guys who made war: only Cheney and Bush are missing

I want to be sure you got this part: he said there was “no history of ethnic strike in Iraq”. I could say that all day and weep.  Did any of those Congress critters listening that day remember the 1991 Gulf War? Or the Shia slaughter in the South? Guess not – heads nodded, guns were loaded and boys went off to die and 18 months later Iraq was on fire in an ethnic Civil War.

But Wolfowiz is still in the fold, still considered to be a serious person. He was even appointed – by Bush – to lead the World Bank. A prophet once anointed is always a prophet I guess, no matter how reality later unfolds.

And so the great and imaginary hero of Iraqi flew back to his homeland, kissed the soil, and the Iraqis said “Ahmad who”? And it got so much better – from Evan Thomas at the time:

For the hard-liners at the Defense Department, the raid came as a surprise. Secretary of Defense Donald Rumsfeld and his senior deputies, Paul Wolfowitz and Douglas Feith, got the news from the media. When Iraqi police, guarded by American GIs, burst into the home and offices of Ahmad Chalabi and his Iraqi National Congress, looking for evidence of kidnapping, embezzlement, torture and theft, the men who run the Pentagon were left asking some uncomfortable questions.

Until at least very recently, Chalabi had been the darling of these top Pentagon officials. How could it be that the men who run the most powerful military in the world could not know that their own troops were about to run a raid on a man once regarded as the hope of free Iraq?

Before the invasion, at the 2003 State of the Union, Chalabi sat smugly next to Laura Bush as her war-hungry husband named the ‘axis of evil’ and set the stage for the disaster to come. Great moment. Good times. 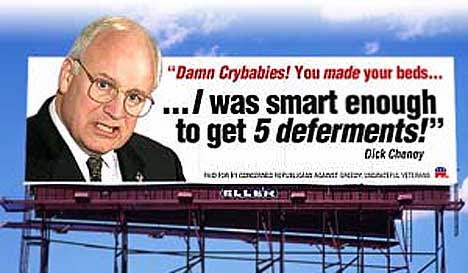 Pure patriot is our Dick – these comments from a former Vice President will serve so well the interests of The United States out in the wider world. Thanks for having our back you creep.

Right. Because you didn’t tear the military to shreds with two wars over a decade –  unless soldier suicides don’t count. And it doesn’t count that the military is overwhelmed with caring for those with traumatic head injuries. Or that we became so desperate for new cannon fodder that the Army lowered standards to accept felons. Mr. “I had other priorities” went on:

“The performance now of Barack Obama as he staffs up the national security team for the second term is dismal,” Cheney said in comments to about 300 members of the Wyoming Republican Party.

Cheney, a Wyoming native, said it was vital to the nation’s national security that “good folks” hold the positions of secretary of state, CIA director and secretary of defense.

Like Rumsfeld, who Bush wanted to fire but was continually blocked by Cheney.

“Frankly, what he has appointed are second-rate people,” he said.

Dick Cheney’s daughter got all gay-married

Liz is a chip off the old block, she is.

“I think, in fact, what President Obama is doing is something that America’s enemies–the Taliban, al Qaeda–have been unable to do, which is to decimate the fighting capability of this nation . . .” – Liz Cheney

Damn that Obama! Wonder if Liz knows that today is the 76th day of the 11th year of the War in Afghanistan.

That’s what I always assumed; didn’t you?

You may already be familiar with Americans Elect, the group working to put an internet-nominated presidential candidate on the ballot in 50 states.  Just visited there to see what names have been submitted to date.

Things only Republicans can say

Implicit in ‘American Exceptionalism’ is that we are different and, yes, better, in the sense that our democracy, our economy and our people have delivered.

But for [it] to truly deliver hope and a sterling example to the rest of the world, it must be demonstrated – not just asserted.

So the Governor thinks we may have slipped down the ladder a bit. Good thing he isn’t running.

AND THIS from Duane:

In response to an assertion from Dick and/or Liz Cheney that President Obama “slandered the nation,” and that he “owes an apology to the American people” for daring to criticize the Bush torture policy while subsequently following Bush-like counterterrorism strategy, John McCain said the following:

“It is very obvious that one of the great recruitment tools that our enemy has is the fact that we tortured people, which is not in keeping with the standards of the treatment of prisoners. We never got useful information as a result of torture, but we sure got a lot of angry citizens around the world, and deservedly so.”

“Deservedly so.” Imagine, if you can, what would have happened if President Obama had said “citizens around the world” were “deservedly” angry at us for torturing prisoners.

Fox News studios would have been awash in a tsunami of mouth foam.

But he just started his book tour!