The most important thing to remember about Labor Day

LONDON (AP) — An 89-year old World War II veteran who was reported missing from a nursing home in England has been found in Normandy after traveling to attend D-Day commemorations, police said Friday.

Bernard Jordan was last seen at The Pines home in Hove, southern England, on Thursday morning. Staff called police when he did not return that evening.

Oh the deliciousness. According to the March 2014 Harper’s Index*:

I guess it isn’t surprising that the Texas Legislature took the time to examine such an urgent issue. The late Molly Ivins . . .

. . . called the Texas Legislature the best free entertainment in Austin. “Naturally, when it comes to voting, we in Texas are accustomed to discerning that fine hair’s-breadth worth of difference that makes one hopeless dipstick slightly less awful than the other. But it does raise the question: Why bother?” she wrote in a 2002 column.

Use a piece of paper to split these faces vertically, so you view them one side at a time.

For some of us it seems, at least physically, genes really are destiny. More here.

If you’ve nothing else to do at the moment, how about some geography?

For those who think about issues like our odd quirk of a weirdly unrepresentative Senate – or those who enjoy thinking about historical what-if’s – this is a short, fun (albeit whimsical) read. The author asks should we redraw the State lines and he says it’s not a new question.

How about States based on geography? Or population? Or cultural similarities? Or watersheds? Perhaps invite Canada to the party?

Here’s a possible 50-state map based on population. (Would someone please explain to Sarah Palin where most Americans live? Thank you.)

Here’s one that contemplates State borders based on shared history and culture.

The author of this ‘cultural’ map notes that:

Ohio is the quintessential swing state because, Woodard says, it’s partitioned. The state’s northeast was once part of Connecticut, so it’s populated by Yankee settlers who did things like found Oberlin College. Moving south, there’s a strip of peaceable Midwesterners living in what Woodward calls The Midlands, and then farther south you get to Appalachia, the political opposite of Yankeedom. “Those two things do not work together at all, and yet they both ended up in the same state,” he said

Drones and pizza – what could be more natural?

This, apparently, is not a parody.

On a lunch break last month, a small custom-built octacopter made a 10-minute flight through the city of Guildford, outside of London. Its special cargo: two large pepperoni pizzas.

The delivery was masterminded by a T + Biscuits, an English creative agency that was hired by Domino’s to test prototypes.

From George Takei, from whence comes all the funny:

What’s one more day? I’m holding off on that Christmas shopping

Let these be a gentle reminder in case we’re to meet Elvis tonight as the clock counts down to the Apocalypse.

But should we survive and awake to a morning, then let these be our Friday oldies.

In which Joe Biden makes people laugh, and why do I always do a flurry of posts on days when no one has time to read them? 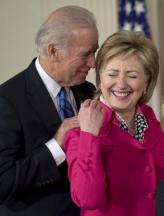 Looks like the southern coast of France? A bit of pure poetry starts at 2:26. (h/t friend Jane). UPDATE: I’ve learned in comments here that I should have said “entirely new to me.”

This photo is from my local TV station –  yes, that’s an alligator, using the crosswalk, as is legally required for any alligators crossing a street. It is the law. 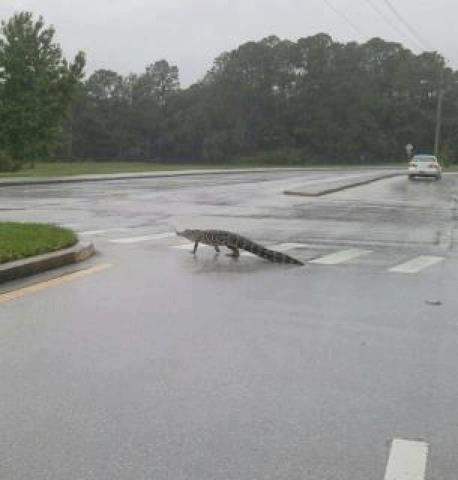 Well, prettier anyway . . . this is new to me (thanks to friend Jane).

Go there, choose a location (Rome? Leaning Tower of Pizza? Cape of Good Hope?), click it, click the arrow and start a panoramic interactive tour. Have fun.

That’s what I would do

Really. Tale a look at this chart from Ad Age.  Apparently the trend is common knowledge in the auto, advertising and marketing industries. And probably quite a few others. 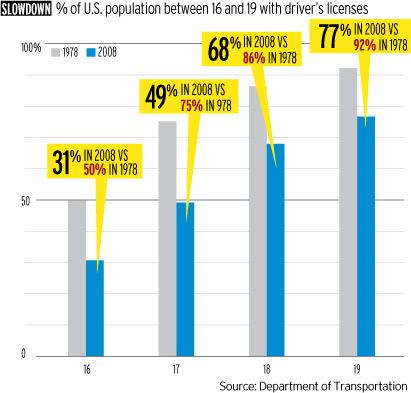 No one is quite sure why, although young people themselves cite environmental concerns.  And since it’s a 30-year trend, it’s probably not because of unemployment or gas prices.

One theory – and the one that fascinates me – is that things like Skype and Facebook have given younger generations a new way to be together, without actually ‘being together.’

Eat your heart out Cary Grant*

As if the case all too often, h/t to Dependable Renegade who finds amusing videos so I don’t have to.

*For the young ‘un’s, go here for the Grant reference.

Attack of teh too-too stupids! 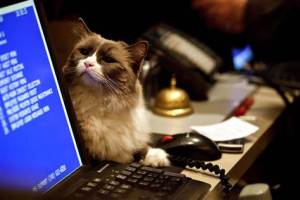 The Algonquin Hotel in New York is a venerated establishment. In the 1920’s  it was home to the celebrated Algonquin Round Table, where literary luminaries, critics and wits of the day held forth over champagne and ice-cold martinis, and came to define a style and an era. Every blues singer of note had to play the Algonquin Oak Room to earn real stripes. A place of history and New York lore.

A charming part of that history began in 1932 and has continued for the 80 years since: the Algonquin has a pet, an honored feline – has had ten of them to date. Like today’s resident, Matilda, they’ve always had free run of the place.

The New York City Department of Health and Mental Hygiene (!?) has stepped in and thrown a leash on Matilda, tradition be damned. Food is served at the Algonquin, and we can’t have animals roaming around, they say. Officialdom has nothing else to do it seems.

Google Translate will now do your entire website with the simple click of a button. Quite remarkable. Or . . . es un milagro! (h/t mac). 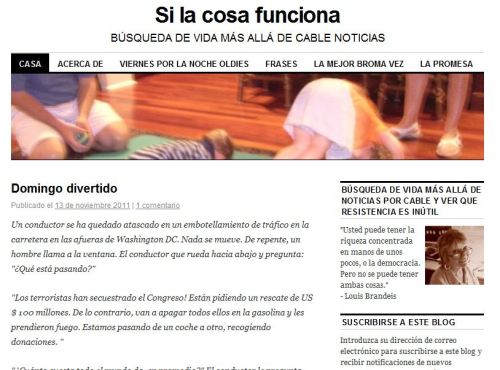 I’ll play your stupid game if you’ll get my damn dinner going.

Teh busy is easing up at last. (it’s Thursday, isn’t it. Yikes. Again.)

Meanwhile, a ‘like’ on my last post just led me to Psilomelane. Stop by for some fascinating miscellany. It’s fun. I especially liked this: 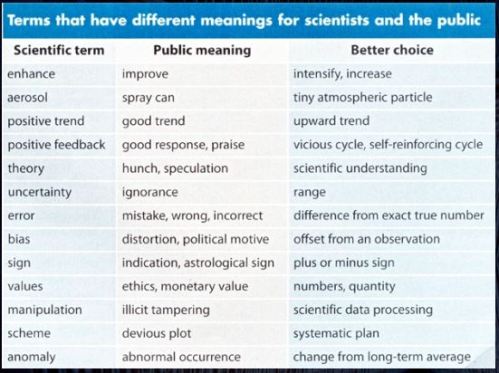 The people of the GOP do not know what GOP means.

The latest Vanity Fair/CBS News poll asked Americans what the abbreviation GOP means, and 49% of Republicans got it wrong.

Gas and Oil Party? Greedy Oligarchs on Parade? Gotta Own the Planet?

Still the best car commercial ever. Ever. Ever.

All your laffs are belong to Maru

Pay attention now and Maru will show you how to survive August.

I just don’t know what to make of this

Is there a lesson here in how kids learn?

English as a first language. Yeah. 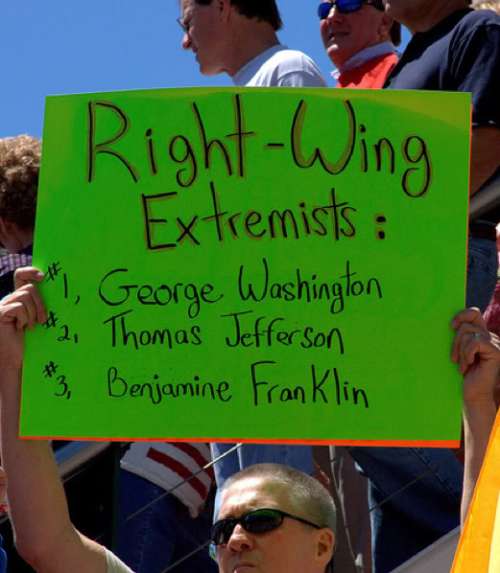 Bet you could use a laugh

Busy day, but even with distraction I can’t shake a deepening gloom that’s closing in as I watch the fourth graders in Washington ‘dealing’ with the country’s finances.

Youtube kitteh wars are over. Everyone else go home.

Andrew Sullivan on where Sarah Palin got her Paul-Revere-rode-in-a-ringin-them-bells-to-warn-the-British riff:

The vicar who gave the Palins a guided tour of Old North Church explains how she got muddled up:

I gave them our standard talk about Paul Revere and the two men who hung the lanterns in the steeple, Robert Newman and John Pulling.

I added a bit about the debate between John Hancock and Sam Adams after they received the warning from Revere (Hancock: “Staying and fighting will look good on my resume when I run for president.” Adams: “You are too rich to fight. Let’s get out of here.” Adams ultimately won that debate.) I did mention that Revere was arrested by British troops and led back to Lexington, warning those British troops that the minutemen had been alerted.

After the introductory talk, we climbed up to the bell ringing chamber, where I talked about how Paul Revere how founded our bell ringing guild in 1750 as a teenager. Governor Palin was particularly interested to see a copy of the original bell ringing contract between Paul Revere and his friends and the rector of Old North, Dr. Cutler. The contract portrays a group of teenagers using democratic principles to organize their bell ringing guild. We did not have the time to get to the top of the steeple to see the lanterns.

He thinks the whole kerfuffle was ridiculously inflated. But he does note:

I knew where all the factoids she cited came from and take responsibility for putting them in her head. I will not take the blame for the odd order those factoids came out. Perhaps it was too much information in too short a period of time to digest properly. Maybe if we climbed to the top of the steeple and viewed the lanterns, the governor wouldn’t have focused on the bells. Who knows?

Who knows indeed? But would anyone want a president who could misread a briefing that badly so quickly?