Security or civil liberties – what’ll it be? 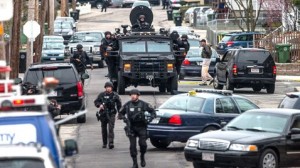 In an earlier post, I quoted (and agreed with) Ron Paul in his expression of concern about the militarized nature of the response to the Boston bombings. In the comments, I responded to a polite challenge from jamesb who put forward a common question: “If those two young men had walked into a house and held someone hostage with bombs…..”

james, there will always be dilemmas confronting us when we try to balance state security with civil liberties. Which, as a society, do we decide is most in need of protection? Hostage crises, for instance, have happened throughout history, whereas the US Bill of Rights stood alone for centuries as an enormous step forward for mankind.

“Jonathan Turley, a Constitutional lawyer, says it best at his blog in a post titled “The Pavlovian Politics of Terror”:

“My greatest concern is that the Boston response will become the accepted or standard procedure . . .

. . . as a thousand papercuts from countless new laws and surveillance systems slowly kill our privacy, we might want to ask whether a fishbowl society will actually make us safer or just make us feel that way.”

Legislation enacted out of fear is fraught with peril, e.g., The Patriot Act.

Just wanted to put this out there.

9 responses to “Security or civil liberties – what’ll it be?”