And thus does Steve Doocy lead the nation

The climate deniers have had a triumphant run over the last 20 years. Their campaign, financed mostly by the fossil fuel industry, has succeeded in changing American’s attitudes and beliefs. (They had a little help from their friends.) 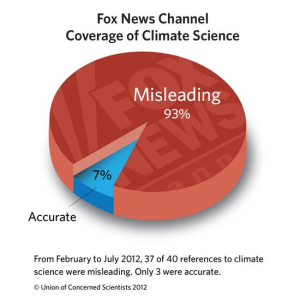 A recent paper from the Union of Concerned Scientists analyzes how FOX News Channel and the opinion pages of the WSJ reference climate science. The entire thing is here.

. . . . examined six months of Fox News Channel content and one year of representations in the Wall Street Journal opinion section based on keyword searches for the terms “climate change” and “global warming.” Our team examined transcripts and articles to determine whether these media outlets mentioned climate science, action on climate change (personal action or government policies), both, or neither.

There are charts and specifics a-plenty

. . .  the misleading citations include broad dismissals of human-caused climate change, disparaging comments about individual scientists, rejections of climate science as a body of knowledge, and cherry picking of data. . . .  much of this coverage denigrated climate science by either promoting distrust in scientists and scientific institutions or placing acceptance of climate change in an ideological, rather than fact-based, context

15 responses to “And thus does Steve Doocy lead the nation”