Just heard it again on a radio news broadcast: “George Zimmerman has been taken into custody and been charged with the murder of a black teenager.” That’s what the news reader said – pet peeve of mine. 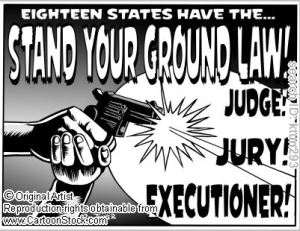 There may well be racial overtones to this crime, and there are valid reasons to suspect that there are, but Zimmerman is not being charged on those grounds. Zimmerman is being charged with murder, quite serious enough on its own. But  the real defendant in this trial will be the State of Florida and its insane  “Stand Your Ground” law.

So is the racial aspect a matter of concern? You bet it is. But I think the larger threat is to all of us; it is another wound to our tradition of common law.

The Supreme Court just upheld strip searches for unpaid parking fines, so I shudder to think what will happen if a challenge to this Florida law makes its way to that gorgeous white temple to justice. I figure the NRA will get there first.