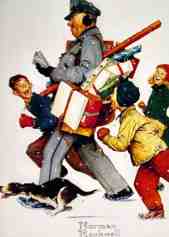 . . . surely the government could cede this function to the private sector , which probably could have a satisfactory system functioning quicker than you can say Fed Ex, UPS and Wal-Mart.

He sees the first two as delivery vehicles; Wal-Mart would become the physical post office. Very convenient for places that don’t have a Wal-Mart.

He adds that the staff at those places “have an incentive to practice civility”. George has never met my carrier or been to my post office, where there are actual humans available to answer customer questions, something they do well and knowledgeably. A good for-profit would dump those helpers in a heartbeat (hmmm, how many jobs would that be?).

But he really gets the disingenuous prize for this shockingly dishonest bit:

Labor costs are 80 percent of USPS costs (53% of UPS’, 32% of FedEx’s), in part because it has negotiated very friendly union contracts.

Leave aside for the moment the usual we-don’t-need-no-stinkin-unions mantra – I’ll wager he left a little something out of that equation, like this: I’ve not noticed tens of thousands of UPS or FedEx employees walking  or driving every inch of residential property in the country every day.

And what would happen to the direct mail industry if FedEx had to hit every house in my neighborhood. No mention – including it would be quite inconvenient when bashing is the point.

There’s a serious discussion to be had about how to streamline the post office. But we’ll leave Will out of that discussion; he’s not interested in being serious.