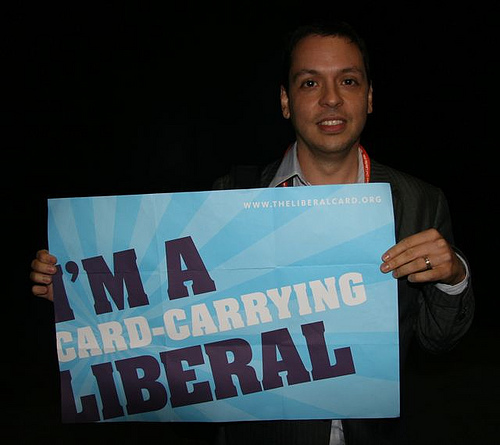 The Netroots Nation convention (referenced below) was so named by readers of Markos Moulitsas‘ blog, Daily Kos, probably the most influential liberal site in the blogsphere. It’s routinely demonized by the right who have dubbed it – and by extension Markos – The Great Orange Satan (the logo color is orange). Kos has gone from a a lone blogger  – immigrant, veteran, lawyer, author, father, political activist -whose very first sentence in his first blog post (in ’04 I think) was “I am a liberal”, to a community of tens of thousands of activists,  hundred and hundreds of writers and advertising rates that would make The New York Times blush.

I’ve written often – here, and here, and here – about the utter failure of the liberal punditocracy and elected Democrats to make the point that liberal media dominates because it’s what people want and support with their dollars.

It’s more successful than its conservative rivals (except perhaps  The Druge Report which even after a decade plus is still only a primitive blog acting as a news aggregator with a point of view). In any free market the major players are the ones that rake in the bucks because people value the product and pay for it. The media may be liberal, but what’s almost never mentioned is that it’s also   what America reads and watches. And pays for. 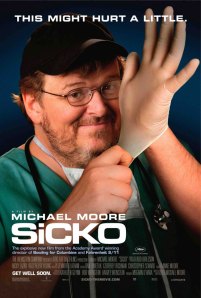 Let’s look at movies and compare the box office success of  the  anti-liberal movie Ayn Rand’s Atlas Shrugged with Sicko, Michael Moore’s liberal documentary. Both of these were in limited release.

Atlas Shrugged:  Here’s a report from the Hollywood Reporter:

The man who says he spent $10 million of his own money to bring Atlas Shrugged: Part 1 to the big screen vowed Wednesday to go through with his plans to make the next two installments, even though critics hate the movie and business at movie theaters has fallen off a cliff.

[Producer] Aglialoro said he had to scale down his ambition for the film to be in 1,000 theaters this weekend, so it will likely be closer to 400. During its opening weekend, the movie took in $5,640 per screen but then only $1,890 in its second. Through Wednesday, the film had grossed $3.3 million since opening April 15.

That paper also covered Sicko when it was released in ’07. here.

Lionsgate far outpaced the competition this summer, but its biggest hit was the Weinstein Co. co-release “Sicko.” Michael Moore’s harsh and humorous health-care expose took in $24.1 million. Currently neck and neck with “An Inconvenient Truth,” it will pass that film to become the third-highest-grossing nonmusical documentary of all time this weekend, though its purse doesn’t begin to compare with the top-ranking docu, Moore’s “Fahrenheit 9/11” ($119.2 million.)

Liberal media has more reach. Because people pay for it. From an earlier post, I’ll republish this, because it can’t be posted often enough.

FROM Whatever Works in FEBRUARY of 2010 :

That most frequent target of conservative media, The New York Times, reported a circulation (March 2009) of 1,039,031 copies on weekdays and 1,451,233 copies on Sundays. And the venerable Wall Street Journal has equivalent if not higher weekday numbers. But since the Times is perceived to be ‘liberal’ throughout and the Journal is perceived to be conservative only in its editorial pages, they’re not politically opposite. The Journal is a hybrid. So a comparison would not be useful.)

I draw the reader’s attention to which of these publications thrive in the free market and which are rich men’s hobbies.

10 responses to “Netroots Nation, the liberal media and who’s making the money buddy?”