Sarah Palin: just the glitter, not the guts please 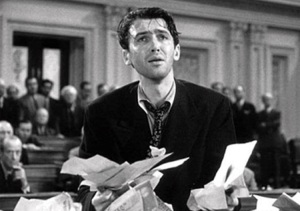 . . . she says Mr. Smith Goes to Washington is one of her “favorite movies,” that it’s “about timeless truths of America handed down to us from our forefathers and foremothers,” that it’s “wonderful” and “not pro-government, certainly, but definitely pro-American,” she must know it was written by a communist, right?

His name was Sidney Buchman. In 1951 he appeared before HUAC and admitted to being a member of the Communist Party, but refused to name anyone else. In 1952, he was subpoenaed again, but refused to honor the subpoena — much like Todd Palin did when called to testify about Troopergate.

Unlike Todd Palin, Buchman was found in contempt of Congress by a vote of 314-0. He was fined $150 and sentenced to a year in Federal penitentiary (suspended). A two-time Academy Award winner, it would be a decade before his name appeared on another American movie.

18 responses to “Sarah Palin: just the glitter, not the guts please”