While the nation once again settles in for another day of blaming the current president for the wars we’ve been engaged in for (respectively) nine years and seven and a half years,  for the perfectly fine economy he mucked up and for his failure as prophet (he promised unemployment wouldn’t go over 7%, 8%, 9%, take-your-pick) . . . here is something I know. I know that Iraq is Obama’s fault because he’s a Democrat and Iraq was their fault – or so said Dan Senor on Chris Mathews‘ tonight – and he got away with it. (Senor was the PR flack for Paul Bremmer when he was emperor of Iraq).

But about that economy thing. This is a chart that I created some time ago for another post in which I was referring to the far right column, a percentage increase in debt – by president. As I said then, taking any one of these line items alone would mean nothing. But over this period of nearly 70 years, the pattern is clear. And damning.

This time, I ask that you look at the number in the first column after Barack Obama’s name. Just look at it. It is the number he gets to start with. So look again at that number. The starting number. And weep. Obama’s economy my ass.

UPDATE: A commenter thinks the chart above explains nothing and asks ‘where are the jobs?’.  So maybe these graphs will help him see where the jobs went. GOP loses jobs, DEMS have to get them back. Old story. 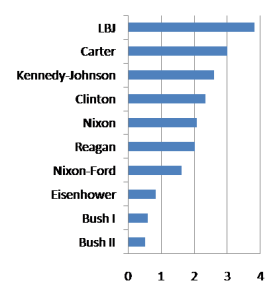 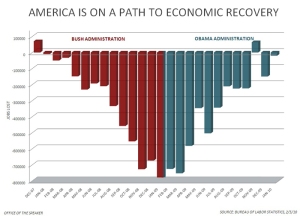