Of course, we need oil. The nations of the world run on oil, and most of their economies would collapse without access to oil. All these things are true right now and will be for some time to come.

But that does not justify 1) the criminal destruction of habitat, environment and entire communities or 2) the political denial that slows – in fact prevents – any serious investment in the future and a world without cheap oil.

We are approaching the end of cheap oil – it’s harder and harder to find what they call ‘sweet crude’, oil that processes well and efficiently. And as long as sweet crude is there, extraction costs are containable. But today we’re increasingly turning to things like shale and deep water which are far more expensive to extract and process. We’ll be paying a whole lot more for oil in the future – and unless we can locate the political will to acknowledge that and put serious money to work on alternatives, that future looks bleak.

BP isn’t the only company out there regularly committing criminal acts. Victims of Exxon Valdez waited decades for compensation as Exxon’s lawyers endlessly appealed until some of the plaintiffs died.

In 1979, a  Pemex blowout off Mexico’s east coast was the third largest oil spill in history. (They were drilling 12,000 feet below the seafloor!) It took ten months to stop the flow. 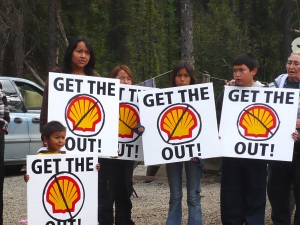 And today, The New York Times has an update about the horrific crimes of Shell Oil in the Niger Delta, where they’ve been spilling the equivalent of and Exxon Valdez every year for fifty years. Fifty years. Half a friggin century. Shell claims that criminals who siphon oil from their pipelines are responsible for much of the problem.  But as the story says, Shell manages to use soldiers to beat women protestors but can’t find forces to guard the pipelines.

The oil spews from rusted and aging pipes, unchecked by what analysts say is ineffectual or collusive regulation, and abetted by deficient maintenance and sabotage. In the face of this black tide is an infrequent protest — soldiers guarding an Exxon Mobil site beat women who were demonstrating last month, according to witnesses — but mostly resentful resignation . . .

Claytus Kanyie, a local official, said of the gulf spill, standing among dead mangroves in the soft oily muck outside Bodo. “Nobody [in the US] is worried about this one [the Mexico spill]. The aquatic life of our people is dying off. There used to be shrimp. There are no longer any shrimp.”

Somewhere, somehow, someday they should pay for this.