Because there’s no hope for me, I had MSNBC on early this morning, listening to that table of silly talkers . . .

Altogether too much attention was being paid to that ultimate carpetbagger, flip-flopper extraordinaire, Harold Ford of Tennesse New York State. There was gossipy speculation about who Chuck Schumer would really support in the upcoming primary – Ford or the sitting Senator. 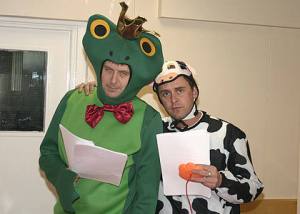 This is why we get the big bucks

But they couldn’t actually know, because, as the always-sharp-as-a-balloon Joe Scarborough asked “Where is the truth? We need some truth tellers out there.”

This clown thinks he’s staring at a camera on a news channel because millions want to look at him.  He may as well have said “Well I”m just going to sit right here and keep a sharp eye out for some of them thar truth tellers.”

Because it would be a distraction to look beyond his oddly oversized nose to see if  there’s anything going on in Afghanistan, where his nation is engaged in a War, as it has been for nine years. Today is the 110th day there.